Welcome to "The Gods Are Bored," endeavoring to be as serious as Sponge Bob since 2005! I'm your host, Squidward Johnson. I play the clarinet.
Just two days before the election, my daughter The Spare and I got a Barack Obama sign for our front lawn. It stood proudly in our yard the moment he was declared victorious in the election.
This morning, after the fact, we found ourselves suffering through one of our fabulous Nor'Easters, which means rain and wind and all-around bleakness. The Spare had a report to do, and I'm old-school, so I insisted on going to the public library.
But first, I told her, we had to give away the Obama/Biden sign to people who deserved it more.
The Spare leveled her super-drama f-bomb scowl at me and demanded to know who we would be giving the sign to. Who, @#$#@ it, who?
I wouldn't tell her. I just pulled up the spikes and loaded it into the back seat of the car.
Have you ever experienced the scorn of a 14-year-old girl? Do you recall that look they can give you? Kind of like your fourth-grade teacher when your long division didn't come out right ... ratcheted up by a factor of ten.
We started off in an odd direction, and she kept peppering me with questions, harsher and harsher. So finally I told her.
"We're taking it to the colored cemetery," I said.
She did not utter one single peep of complaint thereafter.
There's a borough near here that is a historically African American community. During the Civil War, the black soldiers who were killed were not interred in the federal cemeteries ... because the federal cemeteries were white only. So this little borough volunteered to pay for the shipment and burial of any Union Army soldier of color who was unknown or unclaimed by family.
More than 100 African American soldiers wound up in this little local cemetery, including one who earned a Congressional Medal of Honor. 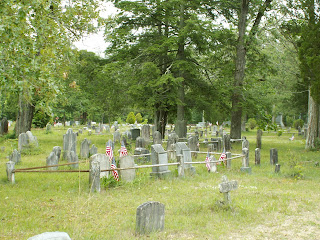 You can find pictures of anything on the Internet. This is the place.

The Spare and I took the Obama/Biden sign and placed it at the head of a parallel row of Civil War-era tombstones, all decked with their American flags.
I said to The Spare, "These men deserve this sign more than you and me."
And she agreed.
As a species we feel that the dead often linger around or near burial places. Very few cultures just heave their deceased off cliffs and forget about them. And so I feel that those soldiers, who knew damned well what they were fighting for, deserved a sign that proves they won.
I did it for them. I did it for my dad's people buried at Andersonville. I did it for freedom of the mind, which every good person should have.
And my daughter, who like all people her age covets souvenirs, gladly parted with a nice one.
I bet when we go back next year on Memorial Day it will still be there.
Posted by Anne Johnson at 7:11 PM

Awesome - and I don't use that word often.

I'm supposedly a member of the young, jaded generation, but that brought a tear to my eye... Good job!

you continue to amaze me and that's a good thing..

That was awesome, yes!

Just awesome. made me, teary again!

This should earn a pulitzer. You are f^%^*$ng amazing.

I thought your "How Faeries Vote" post was brilliant (and I linked to it in my less-than-brilliant post on the outcome of this election), but this one is absolutely outstanding, too. Thank you!!!
-Sabrina

I didn't weep (for happiness) at Obama's success, but I did when I read your post today. You remembered those who literally gave their lives so this time could manifest.

Oh you are a wonderful person!

Your post brought tears to my eyes! A beautiful act of symbolism, beautifully performed and written.

You madam, are good people.

DAMN you, Anne! I had finally stopped tearing up over the election, and you go and post _this_???

(It doesn't help that I'm teaching the writings of early abolitionists to my American lit class just now.)

I still feel the need to pinch myself and make sure I'm awake, that I didn't just dream it all.