This technology we live with just morphs overnight, doesn't it? One day Blogger is the new, hip thing. The next day it's in the rearview mirror.

I say this because I have a colleague who started writing poetry two years ago and then decided to publish a book. I'm afraid I didn't encourage her much, because after all, Mr. J wrote two books, both with major publishing houses, and neither one earned back its advance.

But some people don't need encouragement.  (You probably know the type.) My friend got herself fired up on Instagram with her poems all done up spiffy in their own page, and then she went on Tik Tok, and before you know it she's making a profit on her self-published books. She just released her third.

I hate being outdone this way! I've been writing "The Gods Are Bored" for 16 years, and I can't even get it considered by a damn museum! Life is so unfair!

Then I got to thinking ... how hard could it actually be to become an Internet influencer?

I started looking into this dodge, and I learned quickly that Internet Influencers are by and large:

This was discouraging. I needed look no farther than the first criterion to know I don't have a shot at this whole Influencer thing.

But waaah waaaah waaah! I want it!

So I looked about me, and my eyes fell on Gamma, who though past his prime, is a handsome feline. 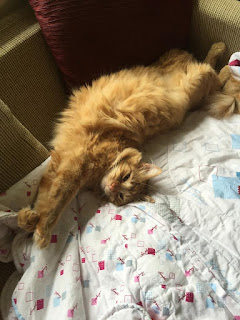 Now there's some serious sex appeal! This cat can influence a can of meaty food out of me every morning, so he has potential.

The next step was to position Gamma. I found a Facebook page called "Disapproving Cats," and I began posting photos of him, asking for people to post their cats to show me.

It's that easy. Gamma (re-named Big Red because that page already has an influential cat named Big Frank) has gotten 450 likes on his third photo and is up to 125 on a picture I posted yesterday!

I figure it's only three or four weeks before I'll be able to self-publish The Gods Are Bored Greatest Hits and sell 6,000 copies.

What a wacky week! September behavior in April! And I'm not talking about the weather.

This past week marks the first time I have had students physically in my classroom for over a year. I have been trying to teach them over the Internet since last fall, and it's been a challenge.

But I guess I won them over, because they seemed so happy to see me in the flesh! Was I an influencer somehow? And wowsa, did I entertain them when they sat down in their desks! I did Mummers strut. I did happy dances. I squealed. I wiped fake tears. When the wind caused the cheap windows to vibrate, I told them it was a nest of murder hornets, sit very still. Oh I was in rare form!

Only about half of my students have returned, and the rest are still online. So I am teaching in a mask, online and in person simultaneously. It's like having a litter of kittens to foster. Soon as you pay attention to one, another one wanders off to walk in fresh paint.

Perfect time for poetry, don't you think? I compiled 40 poems, mostly by writers of color, to do a poetry unit. I call it "Poetry Playoffs" and use brackets like the NCAA to find the class favorite poem.

When freshmen arrive at high school, we teachers get what we call a "honeymoon." They are timid and well-behaved and eager to please. This phase usually lasts about six weeks.

Well, there are only six weeks left in the school year, and the past two days I got small classes of honeymooning freshmen, sitting quiet and attentive (and laughing at me).

It's wonderful to finally have students back in class. Wonderful. The only reason anyone would do this grueling job is the chance to be around young people. And what terrific students I have! Great kids. Their lives matter.

P.S. - I've been doing an SAT prep class online since September, and I gave those students an "out" by asking them if they think they're good to go. Darn if those lil pups didn't say they want to keep doing SAT prep because they like getting together with me. Four kids, opting to do SAT prep! Give me a damn Oscar.

P.P.S. - I saw a bald eagle fly over the school three times this week. This afternoon it lingered long enough for me to be absolutely positive what I was looking at. I don't see it as an omen, just an incredibly uplifting sight.

Hi there, Gods Are Bored fans! Did you miss me? I missed y'all, but I don't want to bore you with more missives about quarantine. I've kind of waited for some little bits to accumulate before tucking them all into a post. So here goes:

1. No visits from bored deities for awhile. However, I just brewed an ugly-looking concoction using magnolia petals, and it might bring a few Ancient Ones out of the woodwork if I have the nerve to try it. Stay tuned.

2. Long-timers here will remember how I anonymously supply plastic dinosaurs to an otherwise boring dinosaur-related site in Haterfield. Well, I haven't done it for a whole year. I figured no one should be touching shared toy dinosaurs. Last week I went to the site for the first time since February 2020. This is what I found.

EXHIBIT A, BELIEVE IN MAGIC 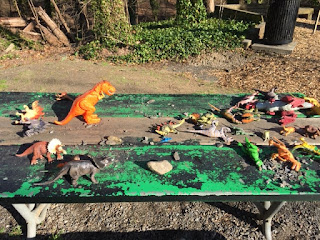 Not one of those dinosaurs came from me! Not one! In fact, I didn't even leave any new ones.

4. Monday I go back to work on site at the Vo-Tech. Some students will be returning to my classroom on April 22. If the case counts aren't lower in New Jersey by that time, it won't be pretty. Oh, and the state of New Jersey has decreed that schools will not be allowed to use room fans for the rest of the year. This decision was made without any state official visiting my classroom to discern that it becomes an Easy-Bake Oven from May 15 on.

6. Gamma the cat trended briefly on Facebook when I posted a photo of him to a page called Disapproving Cats.

7. There are now 7 children and 4 adults living across the street from me. The oldest child is 10 at most. Parents seem to think it's no longer important to teach kids to look both ways when they try to cross the street. Stay tuned.

Yours in the Haterfield trenches,