Hello, and welcome to "The Gods Are Bored!" It's me, Anne Johnson, Pagan since 2005, and that doesn't include the years spent in the closet! 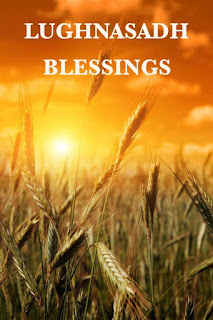 This is the time of early harvest. Gardens are full of ripening fruit, the corn is sweet and tender, and the wheat has been scythed and stacked. The cat is asleep in a paper bag, and ...

Oh. Delete that last part! Cats sleep in paper bags at all times of the year!

I'm solitary this year, missing the group I was with last year, but unable to coordinate anything. But I do have a prayer and petition to the bored Gods on this Lughnasadh Day.

Last week, an agent in New York City asked to see my finished novel, Gray Magic. (I'm working on a new, and very different, novel right now.) Gray Magic has languished for a decade on my shelf, having made it into PDF but no further. Famously, Mr. J took it to St. Martin's Press, where not one but two editors deemed it a superior wrapping for dead fish, should it be in paper form. But I've never lost faith in Gray Magic. I've read all 4,000 or whatever pages of Game of Thrones, and I think my book, at a slender 450 pages, is better.

If this agent turns Gray Magic down, I will post the PDF here on The Gods Are Bored, and you can read it for free, or just send me a donation. That is my Lughnasadh pledge. I'm tired of people telling me this book I worked on for 15 years and four drafts is a sad waste of good words. I'm not buying it anymore. It's a good story.

Time to harvest what I planted, don't you think? Nothing should die on the vine.
Posted by Anne Johnson at 3:16 PM 6 comments:

Well! It's been awhile! How are you? I'm okay, I guess. You know what would make me feel better? A little laughter, Gods Are Bored style.

Over the weekend, Mr. J and I made our first trip to Gunnison Beach. A picture paints a thousand words: 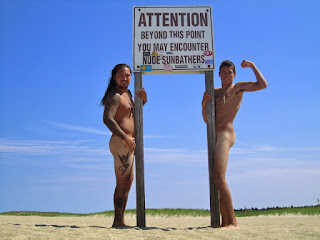 Yes, Gunnison Beach is New Jersey's only lifeguard-staffed, clothing optional beach. As for the option, the vast, vast majority of people there opt to doff the threads.

I loved the place. Great vibe, good-looking people, beautiful view of Manhattan across the water, happy party atmosphere. I wish it was closer! Anyway, on with the story:


Mr. J and I went to Gunnison Beach because some people I'd met at Four Quarters Farm were going to be there. It was sort of a Pagan/polyamory/bi meetup that was advertised as having a little drumming too. Finally, a reason to make the 2-hour commute and the grueling trudge to the nudie beach! I even brought my hand drum.

We found the folks at the meetup, and after some swimming, and people-watching, and sun tanning, we just chilled and chatted with the Four Quarters folks. Much of our talk was about Four Quarters Farm itself and all the fun we had there.

All of a sudden I looked around, and ... what are the odds? ... I saw the same jerk who was rude to the Spare at the Fairie Festival! Yes, there he stood in his birthday suit, wearing a little hat with a feather in it.

Back story: This person is a show-off drummer. At a drum circle, he asked Spare if he could see the drum she was using, then took it to another part of the circle and dumped it. He didn't want to use it, you see ... he just didn't want her to use it. At least that's how it came off at the time. Who asks for a drum and then doesn't even bang on it? Then, to make matters worse, when we called him on it, he exploded at Spare and shouted in her face. Suffice it to say we found the man unpleasant.

And just about the last person on Earth who I would want to bond with on a nude beach. So I did my best to ignore him. (For one thing, I knew my drum would never leave its travel pouch.)

Thank goodness he didn't sit down in our group! But alas. He did sit down.

How's this for bad form? This guy ... same one who outdid himself at Spoutwood ... saw my folded-up beach chair in the sand. He picked it up, unfolded it, and sat his naked butt down on it without asking anyone! Who does this at a nude beach? Would you sit in a stranger's chair at a nude beach? Without even inquiring who it might belong to?

So he sat on my folding chair for about five minutes, banging his precious drum. Then he got up and walked away.

I liked that chair.

I really liked that chair.

It was a special chair. It was given to me on Ventnor Beach by a Canadian tourist who had bought it for her week-long vacation and didn't want to take it home. It was lightweight and easy to carry. It was also sturdy and a good fit for me.

What are the odds that the same person who threw a dark blanket over the Fairie Festival would rise from the rubble to bedevil me again? Because you know what I'm going to say, right?

No way would I ever sit in that chair again. I'm trying to wipe the very image from my mind!

On my way off the beach for the day, I ruefully paid that nice, lightweight, sturdy chair forward to a group of bathers who needed extra seats. They were grateful for it. I was sorry to see it go.

Today I went out and priced beach chairs. Even though it's mid-season, the doggone things are costly. Oh, by all the bored gods ... I may be faced with the options of sitting on the sand, or shopping at Wal-Mart!

Michael Divine, if you Google your name and find this, please know that I could make concessions for you regarding your behavior in the drum circle. But I can't even imagine how you could show the colossal bad form to use a beach chair -- on a clothing optional beach -- without first asking to do so. Where did you learn your manners, the Planet of the Apes?

And oh, by the way? You're a lousy drummer. A legend in your own mind.