A week ago I went with six students from my school to serve dinner at the Cathedral Kitchen in Camden, NJ. This is a (of course) Christian charity that serves dinner and sandwiches to the homeless. We served 381 dinners in less than 2 hours, including a family of 12.

The students from my school worked their butts off. They never slacked and never complained. They were still smiling as we swept up the place.

Readers, it's humbling to go to a place like that and see our nation's most vulnerable citizens. There are family tables there, for the love of fruit flies!

But there was nothing shabby about what those folks got to eat. We served baked chicken, mac and cheese, corn on the cob, and salad, with two pieces of bread. The bread was definitely donated by various bakeries, because it was artisan in a dozen hues.

I spent 2 hours in the kitchen, dropping salad and bread onto plates, which then went out, restaurant style, to the assembled patrons.

This navel gaze ends with a video, made by the students at my school. I'm just dumping it here. There's a really short bit about the Cathedral Kitchen, and my picture is in the "respect" segment, but it's on the long side. On the other hand, if you want to see where your books went, here are the kids who got them.

I'm quite sure you three regular readers are tired of hearing about the ugly new houses that were built across the street from me. They've been done for awhile, and I've been about as passive-aggressive as I could be about it.

But yesterday I arrived at my home to find that the Borough of Haterfield had planted this: 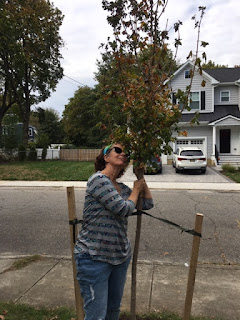 I'm no expert on trees, but this little maple looks like it's suffering from about 10 major diseases. I don't care. I'm going to throw my whole heart and soul into keeping it alive and thriving.

This is a borough tree, meaning that it will be pruned by the town. They will even give us the "gator bag" for watering next summer. I got a nice little note through the letter box telling me all about it.

Today I ran into a neighbor who sits on the Planning Board in town. He said that my street was the last one in the whole town to get an ugly tear down and re-build. All the other streets had already gotten one (or many). And since this giant driveway was installed, the town has changed the laws about big ugly driveways. Figures. But oh well, la di dah! I got a tree!

Today was a banner day in Haterfield. Our dinosaur sculpture turned 16. That means it's been about 18 years since I started leaving toy dinosaurs at the historical site on the edge of town. (Some of this blog's most devoted readers will remember about that.)  Happy birthday, Hadrosaurus fucku!

EXHIBIT B: HATERFIELD'S CLAIM TO FAME 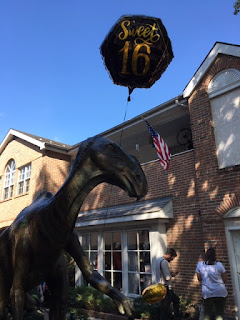 One thing I can say about this statue is, it's life-size. This was a formidable critter. Life was probably better then, when herds of these things browsed some ferns and minded their own damn business.
Posted by Anne Johnson at 4:39 PM 5 comments:

When the Anxiety Is Justified

Welcome to "The Gods Are Bored," melting down like ice cream on a sidewalk since November 2016! I'm your anxiety-plagued hostess, Anne Johnson, and are you as nuts as me?

First I thought that the office of the presidency would hold so much gravitas that even Donald Trump would assume a mantle of dignity. Nope! That hope was dashed in about 20 minutes.

Then I thought that members of his party would stand up to his outrageous behavior and school him on his adolescent tweets. Didn't happen.

Then I thought the Muller report would show that he cheated his way into the White House. It didn't.

Then I thought wiser heads would school and advise him on foreign policy. They did ... and got fired.

Finally I thought he would do some blatantly impeachable thing that would turn everyone against him. He did it. He got away with it. He'll keep doing it.

Oh my Gods I am melting down. Our country is falling off a cliff. A third of the citizens don't give a flying fuck, and another third are pushing it so it falls faster.

I read somewhere (don't have a link, this is a blog, don't need a link, why should I have one when the creepers don't bother) ... emmm ... I read somewhere that anxiety is actually a positive genetic trait. Anxious people are planners who assume the worst to try to keep it from happening. There's a need for people like this, because if the whole human race was blithe, everyone would be surprised when shit hits the fan.

At the same time, anxious people get criticized for "looking on the dark side." Okay, motherfucker, I look on the dark side! And guess what? It's dark! There's no "things will all work out" here! My anxiety about this loathsome beast in the White House was perfectly, completely, and utterly justified. He is worse than my nightmares predicted.

Now is when it pays to be anxious. At least I know shit-hitting-fan when it comes. I expected it all along.
Posted by Anne Johnson at 5:34 PM 8 comments: