I've spent the last three hours making side dishes for Thanksgiving dinner. Cranberry sauce too. Ever notice how these recipes make enough for a large family and friends? Yeah, well, this year it's just me and Mr. J and one poorly-behaved orange tabby cat named Gamma. The governors of Pennsylvania and New Jersey have asked residents to limit their Thanksgiving guests to people living within the home. 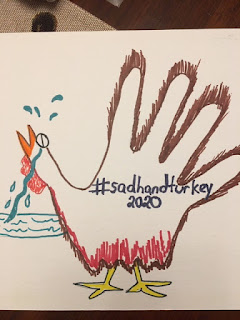 Every year since 1989 I have hosted Thanksgiving at Chateau Johnson (now an official government residence). That first year my daughter The Heir was 5 months old, and we invited her godfather from Washington, DC. It snowed about 4 inches. Made for beautiful photos.

There was a memorable year when I hosted a couple of principle dancers from the Philadelphia Ballet. Mr. J had just finished writing a magazine profile of Arantxa (who was practicing to be the Sugar Plum Fairy in "Nutcracker"). She and her Russian husband had never been to a traditional Thanksgiving dinner before. He ate everything in sight. She had a small portion of white meat turkey and an undressed salad. They were lovely. Literally.

On several Thanksgivings the Monkey Man has come to eat with us. Once he brought his sister and her boyfriend. Of course the monkey, Bongo, came too. Therefore, in Bongo's honor, I made banana bread.

When The Heir started working for a sculptor named Kate Kamen, I invited Kate and her husband to Thanksgiving. We learned a lot about spear fishing and other Type A behavior that would have made the ballerinas wince.

But mostly on Thanksgiving I had my mother-in-law here with us. She was an exquisite chef and often brought dishes or dessert, until she grew too infirm to cook. Must have been at least 10 and probably more like 20 years that she joined us every year. She was with us on the fateful Black Friday when Decibel the parrot died.

One year when The Heir was about 22 and The Fair about 17, I had to drive to Baltimore on Thanksgiving morning to pick up Mother-in-Law. It's a good 100 miles from Philly to Baltimore, and then turn around and drive back ... and then put the turkey in the oven. The drive down was uneventful. But coming back -- mind you, 11:00 in the morning on Thanksgiving -- we got into a whopper of a traffic jam on I-95. It was a parking lot, and the clock was ticking on getting that bird in the oven.

When it looked unlikely that I would return to Chateau Johnson in a timely manner, I phoned home to ask for assistance from my grown daughters. The conversation went something like this:

Anne: Fair, I need you to put the turkey in the oven.

Fair: Not me. I'm not touching a raw, dead bird! Forget it! Eww, gross!

Anne: Please? I'll walk you through it.

Fair: No way. I'd rather eat peanut butter.

Anne (turning to an inferior Plan B): Put your sister on the line. Heir, are you there?

Anne: Not good. Listen, I need for you to unwrap the turkey and put it in the oven. I'll walk you through it.

At this point the traffic moved an inch.

Long story short, that was the year I learned to use the convection setting on the oven.

In the time of novel coronavirus, I will not be stuck in traffic on I-95. I won't be making salads for ballerinas or banana bread for Bongo. I won't be going to the shopping mall at 6:00 a.m. with The Fair or to a Christmas tree-lighting in Haterfield with The Heir. My county is a hot spot, so I don't even want to go to the hardware store for new outdoor lights.

But I might do that last bit. If ever there was a year when we have to beat back the darkness, this is that year. We started with the election of Joe Biden, but it's a deep hole we're finding ourselves in, what with Trump tweeting RIGGED RIGGED RIGGED and 70 million Americans believing him and another 250,000 dead of a disease no one had this time last year.

Light is what we need. Lots and lots of light.

Four weeks until Solstice. I'm here, it's Thanksgiving, and it's just me and Mr. J and a poorly-behaved orange tabby cat named Gamma.

Important Public Health Announcement for the Citizens of Johnsonia

Hear the words of the Grand Wazoo of Johnsonia, Anne Johnson:

Effective immediately, the borders of the Independent Republic of Johnsonia are closed. No one will be allowed to leave Johnsonia or return to it except for essential travel.

No non-citizens will be allowed to visit or stay in Johnsonia. This includes outdoor gatherings and holidays.

Essential travel is defined as work-related or food-gathering-related or of medical necessity.

The Wazoo would like to take this opportunity to SCOLD the United States of America for IGNORING and SCORNING the advice of SCIENTISTS who WARNED THIS WOULD HAPPEN. May this plague fall upon the shoulders of the U.S. citizens who most resisted considering it important, while passing over good people who heeded the advice of health professionals!

Wazoo probably gonna be working from home beginning next week. Just a hunch.

Official Pronouncement from the Independent Republic of Johnsonia

On behalf of the citizens of the Independent Republic of Johnsonia, I wish to congratulate you on your resounding victory in the recent presidential election.

We of Johnsonia are looking forward to an era of cordial relations, productive alliances, and mutually beneficial trade relationships.

In all honesty, we're quite relieved at the outcome of the election. When it was announced, our color guard banged pans in the northern boundaries of our nation. We will be honored to send a delegation to your inauguration, if you have a public ceremony in these trying times.

It's a blustery morning here in the Independent Republic of Johnsonia, and the Grand Wazoo has a day off.  I, Anne Johnson, am that Wazoo.

I'm very glad to have my own country, because it is Election Day in the United States of America, and if I was still a citizen of that nation, I would be FREAKING THE FUCK OUT.

Instead, I'm busy with affairs of state in my own dear country.

Several prominent blue jays have hopped forward for Cabinet positions. To balance out all that blueness, I have also engaged four cardinals to dispense justice and to see to an even distribution of government-issued rations.

Squirrels are the opposition party. No surprises there.

Gamma the cat is now Secretary of the Interior. He is a known polluter, but he promises to keep Johnsonia free of disease-bearing rodents.

My firstborn daughter has agreed to be Ambassador to the United States, and her somewhat baffled boyfriend is now Ambassador to the E.U. (He stood for our national anthem but had to be briefed on the whole secession thing afterwards.)  If daughter Fair is interested, the ambassadorship to Canada is still open. If she's not, I'll appoint a blue jay.

Johnsonia just celebrated its first Samhain -- Druidism is the state religion -- in a very depressing manner. While a record number of American trick-or-treaters took candy from a basket in front of the house, we citizens hunkered around a bonfire out back.  The U.S.A.'s cavalier response to the pandemic is one reason for secession, and on Samhain we felt it keenly.

Johnsonia wishes its neighboring nation a free and fair election and a peaceful transition of power. Thank goodness none of that matters to us!