Hello from "The Gods Are Bored" on this day that begins with Y! Don't ask me which day it is. There will be time for that in late August.
Every now and then I do something that I know isn't right, but I do it anyway. This makes me human.
A few months ago Mr. J gave me a jean jacket for my birthday. It's not one I would have chosen myself, being kind of heavy and clunky. But pish tosh, I'm not looking a gift horse in the mouth! I decided to make the jacket more appealing by covering it with embroidery and cross stitch and patches and pins.
So I went to Etsy, and I searched "Gritty Cross Stitch," and the most badass Gritty cross stitch came up. Sadly, it was for a finished cross-stitch made by the artist. There was no offer of the stitch chart by itself, which -- if you do cross stitch you know -- is a necessary element of the proceedings.
I loved that Gritty, though. I loved it so much I downloaded the photo and drew my own chart.
"Now Anne," you say. "That's copyright violation!"
EXHIBIT A: HOW COULD I RESIST? 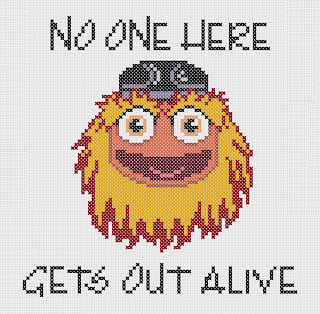 Yes, it is theft of intellectual property, and I felt sorely bad about it. How would I feel if some up-and-coming humorist cribbed this blog for pithy sayings?
Before I mustered enough guilt to message the creator on Etsy, the entry was gone. Gritty had been pulled!
But all was not lost. There's a badass page on Facebook called "Gritty Memes for Philly Teens" which of course features Gritty in all his Anti-fascist glory. Lo and behold, someone posted iron-on patches that use the same Gritty as the cross-stitch.
I left a comment on the post: Are you the artist of this Gritty?
No, the poster was not the artist, but she knew the artist and gave me the artist's name.
I sent a private message to the Gritty artist, to whit: "Hi, I used your Gritty design on my jean jacket, and I feel like I ought to give you $---. Do you have a PayPal account?"
Two days later, I got a reply.
"GRITTY BELONGS TO THE PEOPLE."
Oh, readers. Sometimes the world gives you bliss. Especially if you are a disciple of Gritty.
Now I can proudly wear my Gritty! And if the slogan around him was a bit unnerving to you, well, it was to me too. Here's my jacket:
EXHIBIT B: ALL IS WELL 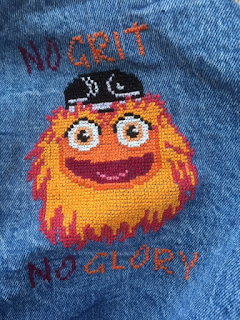 Best part is, Gritty gave my jacket a theme; namely, monsters. I have since added a Flying Spaghetti Monster patch, a Cthulhu patch, I'm halfway through a Moth Man cross-stitch, and I put a nasty Donald Trump tweet on the side with the hashtag #notmypresident.
Monsters. All monsters. The word of Gritty for the people of Gritty, thanks be to Gritty.
Posted by Anne Johnson at 2:33 PM 8 comments:

My friends, I sit here every day doing more or less the same thing, which is next-to-nothing. My state is open, but I don't go anywhere except the grocery store and the pharmacy.

That will change when September rolls around. I will be expected to report to my classroom. There have been no plans revealed about what that classroom capacity will be and how my students and I will be protected from the novel coronavirus.

Having worked in a school for 15 years, I'm here to tell you it's a swirling miasma of contagion. In January, just before Covid, I had a virus that had me coughing for weeks. My English department colleagues all caught it too.

I listen to the news obsessively, so I know what I can do to protect myself: masks, hand-washing, face shield, hand sanitizer, don't touch face, social distancing. I'm prepared to do all of that.

But one never wants to leave any tool on the table, so I have turned to magic for a boost in my protection. Magic doesn't replace the mundane safety measures, but it can enhance them.

If you're looking for a good place to start learning about a magical practice, I highly recommend John Beckett's new online course Operative Magic. John is a Druid and a very reasonable, approachable person. His course is six sessions, homework optional (mostly to get his very helpful feedback). John gives a nicely-done history of magic, the philosophy of magic, and then concrete information on how to create a spell. The course is $50, which I call money well spent. I only have one session left to complete, so I've gotten a good view of it.

There are also two books I will recommend if you feel any affinity for organic magic stemming from Appalachian traditions. The first is Staubs and Ditchwater by Byron Ballard. Byron is a hedge witch working as a Pagan. The other book is Backwoods Witchcraft by Jake Richards. Jake works through the Christian tradition, which is to be expected -- generations and generations and generations of Appalachians have been Christians. But what's interesting about Backwoods Witchcraft is how ancient and British Isles it feels. Both of these books show you how to do spells using items you have all around you in your house and yard.

Skeptics might say, "Why turn to magic? Isn't that just a bunch of superstition?"

My answer is, "Why not? And what you might call 'superstition' I call 'covering the mystical bases.'"

This pandemic is the most dangerous existential threat to my existence since I was a blithe teenager doing stupid, reckless stuff. I'm not leaving tools on the table. That would be foolish.
Posted by Anne Johnson at 1:03 PM 10 comments:

When the Battle's Lost and Won

In the freezing cold, in the relentless heat, in the broad daylight and darkest night, people have been protesting new natural gas pipelines all over the place. And after being arrested and tear-gassed and shot at and half-starved, they have won.

On June 5 came news that the infamous Dakota Access Pipeline and the contemptible Dominion Energy's Atlantic Coast Pipeline are both now in no-go mode.

The Atlantic Coast Pipeline project cancellation is particularly welcome, in that the Supreme Court ruled quite recently that Dominion Energy could put the damn thing under the Appalachian Trail and through two national forests. But the company had already thrown tons and tons of ducats at legal fees and was facing yet more environmental impact statements.

What kind of name is "Dominion Energy" anyway? Sounds like something that would be run by Galactus or Magneto. Fuck domination! You wanna put your pipeline under the Appalachian Trail? I can tell you better places to put it. To shove it, actually.

The Dakota Access pipeline is better known because it runs through Native American lands and is strongly opposed by the Standing Rock Sioux Tribe. This pipeline had been ordered to shut by President Obama in late 2016, but then the Orange Menace got elected and ordered the damn thing back into business.

But much of what the Menace has done to scuttle Obama's legacy has been done so stupidly and shoddily that it doesn't stand up in court. The DAPL is just another of these dumb-ass deals ... same as DACA.

Oil and natural gas are finite resources. Extracting them is costly and damaging to the environment. Wind and solar are infinite resources with much less environmental impact -- and it's not like these industries don't need workers!

Of course some fat cats won't rest until the last drop of oil is potentially sucked from the fossilized ground, but there is some dim hope that gas and oil are becoming as passe as land line phones.

And this hillbilly right here is rejoicing that the Atlantic Coast Pipeline won't wreak its devastation under the Shenandoah National Forest, the Monongahela National Forest, the Appalachian Trail, the Blue Ridge Parkway, and even the Chesapeake Bay. For the love of all the Gods and Goddesses, busy and bored, can we just leave those mountains alone?
Posted by Anne Johnson at 11:44 AM 7 comments: