Well well!  His holiness Pope Francis has left Philadelphia! His plane flew right over Chateau Johnson on the way out of town. And that's as close as I got to him, thank you very much.

However, his presence blessed my little corner of the world in a wonderful way.

About 18 months ago, a gay couple bought a big house across the street. The house had been lived in by a family, probably since the 1960s or even longer ... so it had fallen to a sort of shabby disrepair, outside and in.

Boy, did that house get a makeover! Fresh exterior paint, a fish pond, chain-link fencing torn down, tasteful exterior lighting, and a whole, new, lavish interior as well. That aside, these new neighbors (and their cute kids and their big, happy, black dog) are just a joy to be around. It's always a pure pleasure when a nice family moves into your everyday sphere of existence.

So the pope came to Philadelphia, and the whole city closed down to keep him safe. This disruption in routine reached into Snobville, since we're not very far from the city. It occurred to me that our little block should have a party, since probably everyone would be home. (Turned out they were.) The only trouble with parties is that you have to plan them. Which this Pagan did not want to do.

On Saturday I had just settled into the easy chair to grade papers when there came a knock upon my door. It was the gay neighbors. "Oh! You're here!" they exclaimed. "We're having a party! Come on over!"

Reader, those fellows had their back yard looking like Party with a capital P. There were yellow and white balloons in clusters, a life-size cutout of the pope, pope "masks," pope candles, and a big banner that said "MEETING OF THE FAMILIES." 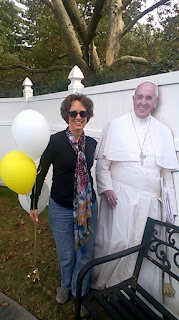 They had a DJ. They had a bbq rib contest, and I got to be a judge! Mr. J came over after awhile, and he had a good time too. When it got dark, they lit the pope candles, and the DJ turned on a portable disco ball. All the neighborhood tots went swimming in the pool (yes, they even have a pool) and then entertained us by dancing and lip-syncing. The adults got gently plastered (self and Mr. J and hosts excepted). The music lasted long into the night.

This was the pope party I wanted to throw, except I didn't have to lift a finger. Gosh, I didn't know about it until it was too late even to cook a church lady casserole! Not that I would have needed to -- the place was chock-a-block with delicious food and icy cold beverages.

The funny thing about organized religion is that it does have a spillover effect. Because we Snobvillains were stuck in our neighborhood, as opposed to running all over the place, we got together as families and enjoyed each other's company. So I would have to thank Pope Francis and the World Meeting of Families for a genuine trickle-down experience.

Regarding the pope's message to Americans, wow, was this Druid pleasantly surprised! Save the planet, cooperate as lawmakers, end the death penalty, families are great, kiss babies ... could have been worse, much worse.

And since I used to be all about humor, I leave you with this very short and completely hilarious article from The Onion about Papa Frankie's experience in Philadelphia. He sure got it right.
Posted by Anne Johnson at 12:26 PM 6 comments:

Someone asked me, "Under what circumstances would you go to see the pope?"

I said, "Not while there's one tree that needs a hug."

A blessed Alban Elfed to you all! Not long ago we had a wonderful Pagan Pride Day in Philadelphia. How very different from the circus that will come to town with Pope Francis! Here is our altar for the Main Ritual: 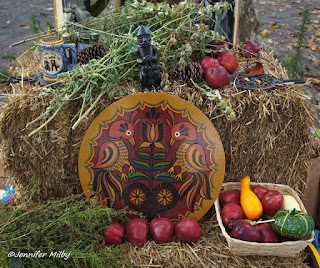 Beautiful, huh? Everyone in the circle got to Hail their deity of choice. No one even flinched when I said VULTURE. Pagans understand these things.

This is actually the hardest holy day for me. I don't like to bid farewell to the Sun, the bright Sun, that kisses our fields and brings the fruits of the harvest. It's not a good-bye, though, it's a "see you later." The Southern Hemisphere needs to have summer too.

Therefore, on behalf of all the (not so very) bored deities out there, I wish you and all those you love a bountiful and happy Alban Elfed. May Vulture love you, and keep you, and make His wings to fly above you. 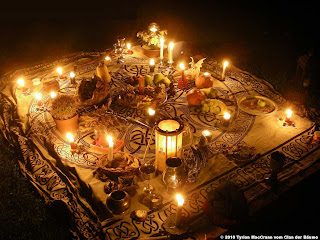 Blessed be!
Posted by Anne Johnson at 7:05 PM 7 comments:

Hello and welcome to The Gods Are Bored, Labor Day 2015!

No one's just joining me now, so you all know how I feel about organized labor. 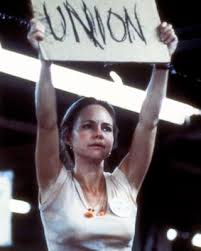 I can't say one more word on this topic without weeping. Unions have been all but busted. Our only hope is a candidate like Bernie Sanders. Slim hope indeed.

Item: I now have 8 chapters of my novel, Million Dollar View. And it appears that yet another agent has tossed the manuscript of Gray Magic into the dustbin. On November 1, 2015, I will put Gray Magic on here for free download. Just because various agents haven't liked it doesn't mean you won't. I'm not going to see all my wonderful characters, who walked with me through a large part of my life, just sit on the shelf like unwanted teddy bears. As for Million Dollar View, I've decided it needs more than the sleigh ride I'd been giving it. I can make it shine, it will just take a little longer than planned.

Item: On Saturday I facilitated my very first drum circle! Yes, I volunteered to do a drum circle at Philadelphia Pagan Pride Day, and by golly, they signed me up, and we had a nice group of seven people ... including two who could drum way better than me! (That was what I was hoping would happen.) 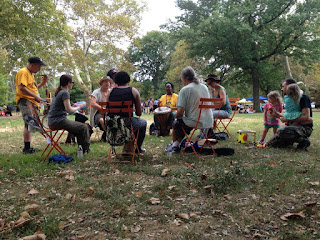 That's me in my mountain hat, far right on orange chair. Thanks for the photo, Cliff!

Item: I met The Heir's boyfriend. He's adorable. I'm happy for her! He had many questions for me about Paganism, since he grew up in a strict Christian household.

Item: Mr. J and I made four excursions to Gunnison Beach this summer. It is a clothing optional beach. It's a long drive, especially in traffic, but the payoff is swell.

Item: School started this past week. I have more than 60 students in three classes (block schedule), all freshmen. We are in the midst of a heat wave here in Philadelphia. My classroom was moved from an air-conditioned room to an older room. It was fully 90 degrees in the room every day last week. I cannot project sound from my computer so that anyone can hear it, even with the fans off. Anyone in the market for a challenging profession?

Item: There is a brand new Extra Chair. This one is male. He will be starting his sophomore year at the local parochial school. If he likes us, and we like him, this is three years of guaranteed monthly income. Withholding judgment on this right now.

Item: Spare is a Resident Assistant in a posh dorm! I trash picked a beautiful love seat for her apartment. She's still working on her web series ... a task more challenging than teaching in an urban school.

That's the news! Thanks for dropping by. Be sure to look here November 1 for Gray Magic, free to many good homes.

Hello and welcome to The Gods Are Bored! If you happen to be in the Philadelphia area on Saturday, come share a drum circle with me at 3:00 in Clark Park! Yes, and if you can really drum, I sure could use your help!

My last sermon concerned a scheduled visit from His Holiness, Pope Francis, to Philadelphia. The pope will be here from Friday evening until Sunday evening. And basically the city is grinding to a halt to cater to him. 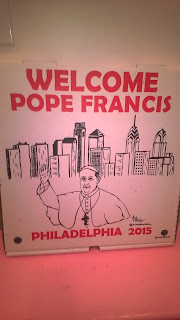 Crowd estimates have been hard to come by. Some are as high as two million. Some favor 60,000. Well, that's a big difference, right?

I guess reality has caught up with Philadelphia -- and the pope. Today, out of the blue, the Archdiocese of Philadelphia (had to look up how to spell it) announced that people would need tickets to get close to the pope. Independence Hall, where His Holiness will deliver some sort of speech, is releasing 5,000 tickets at 9:00 Friday morning, online only.

So much for democracy.

What the heck happened? This was a chance for anybody to see the pope! All you had to do was rent a hotel room, or someone's house, and stroll out on the day of the event, and there he would be!

Nobody asked me, a practical Pagan, to make suggestions about the pope's visit. I'm not sure why they didn't come to me for advice, because, after all, I spent a memorable 12 hours with Isaac Bonewits and Skip Ellison a few years back, so I know all about communing with holy leaders of religious affiliations. My suggestion would have been to announce tickets way ahead of time. Knowing the basic size of the crowd might have saved a lot of people from being put out for a whole weekend.

This afternoon I heard on the radio that many of the booked-up hotels have been seeing a tidal wave of cancellations. I imagine the same might be happening to the good citizens of Philly who put their residences up for rent (at widely varying prices). Nothing could possibly soften the blow of learning that your prospective renters -- who were going to give you $8000 for your efficiency on Walnut Street just so they could see the pope -- have decided to go to Tahiti instead.

This was a bait and switch, pure and simple. People are finding out now that their chances of celebrating Mass with Pope Francis are slim to none. Meanwhile, there's been no talk of scaling back the mammoth road closures planned for the Delaware Valley on Pope Weekend.

I would hate to be a Roman Catholic today. I really suck at being the first in line online, so it would be really, really frustrating for me to think that a man I revere could be six miles away ... without me being able to see him.

If for no other reason than this, being a Pagan is wonderful. If you admire a particular leader in any of our many Paths, chances are you can rub elbows with that person as soon as you want, for as long as you want. Size matters.
Posted by Anne Johnson at 8:16 PM 3 comments: