Sacrificing Grandparents on the Altar of the Economy: A Rant

Did you see where the wealthy Caucasian lieutenant governor of Texas went on Fox t.v. and said that senior citizens would be willing to sacrifice their lives to keep the economy humming? He's 70 or some such himself, so of course he could speak for all the wealthy white motherfuckers loving grandparents out there.

Count me the fuck out, Tex. I'll hang on to my life, Dow Jones be damned.

There is hardly anyone alive now who can remember the Great Depression. My mother was a little kid in the 1930s, and if she were still alive she would be 95. But the point is, America made it through the Great Depression. Without killing grandma! Jesus, has nobody read the last chapter of The Grapes of Wrath?

This bonehead Texas lt. gov. had the bloody nerve to speak for all older Americans everywhere. What does he know about the many households that are headed by grandparents? I'll tell you: He knows squat. Bupkus. Nada. Less than zero. There are significant numbers of such households, including in his state.

And excuse me for pointing something out to this clueless moron, but he forgot to ask grandchildren if they value their jobs over their grandparents. That's a big omission! Oh my Bored Gods, the stories I could tell him about my students and the bonds they share with grandparents! I wish I felt comfortable telling you all about it, but it would violate my students' privacy. But what does an old white guy care about people of color in New Jersey? The economy! Jobs! Executive Compensation! Salaries! Asshole.

I can only talk about myself.

When I was a child, growing up in a household ravaged by mental illness and redneck mentality, my father's parents were a bastion of strength and sanity. My life would have unfolded entirely differently if I had not had them and their gentle care, their little mountain home, and their comfort. 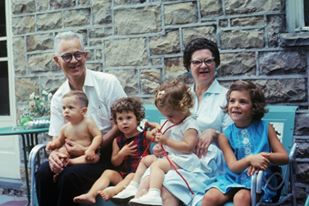 That's me on the far right. Smiling.

In order to keep my grandparents from dying before their time, I would gladly have worn feed sacks and eaten potato peels, or stood in line for soup, or lost my job. What amount of money can you place on the lives of your grandparents?

This is not to say I would never be willing to sacrifice my life for my daughters. Pish, tosh! I certainly would! But the reason for that self-sacrifice would have to be more than the national economy. My daughters are already suffering from this recession, and they will continue to after the quarantine ends. But I have confidence in the sweep of history.  We will bounce back. And if it gets grim, if we find ourselves in a Great Depression, we will live as they did then. Sharing sacrifices.

I want to live to see my grandchildren, if at all possible, thank you very much you clueless moron of a lieutenant governor. A plague upon your house! Go ahead and sacrifice yourself. As for me and my house, we need each other more than that.

He exemplifies the "profits over people" mentality. Trump buys into that too. And, I'm sure, the entire 1%.

stoopid white fucktwat TX muthafucka! hope he gets the virus and dies!

my maternal grandparents were my sanity link in my abusive childhood home.

If only the 1% would catch the damned virus and die. That would balance the scales a tiny bit...

He should go out to intentionally infect himself and then die. He can be a Christ-figure, remembered forever--NOT.

My mother was born in 1928 in the state of Maine. She grew up during the Depression as an only child and as an only child, she probably was better off than most. Although initially, she was raised in the home of her maternal grandparents who had 12 children so the quarters were quite cramped, but always full of love. My mother at 92 is still alive and very well and very spry. In fact, she's an artist who goes out to her studio everyday...to offer her up as a sacrifice just because she's 92 is ludicrous. Her grandchildren love her dearly as do her great grandchildren. Where do people get ideas like this? I mean getting them is one thing, but actually voicing them is another? I think the wealthy Caucasian lieutenant governor of Texas who went on Fox TV has some mental issues and needs some serious psychiatric guidance and possibly some medication as well.

Amen! I am Raising a Grandchild and just finished Raising her older Brother last Year since their Mother {our Daughter} is Seriously Mentally Ill, I'm also the full time Caregiver to a Disabled Spouse, so I don't feel particularly expendable, my Family would be screwed without me since there is nobody else to fill the void should I be Sacrificed at the Altar of the Almighty Dollar! This Pandemic is revealing people's priorities and showing us that not everyone shares the same ones. This clusterfuck of an Administration and it's Cult Followers put Money and Things before People, clearly... Be Well and Stay Safe... Love the pix of you and your Dear Grandparents!