High over New Mexico: Interview with a Hallucinogenic Plant

Welcome to "The Gods Are Bored!" Yesterday was Back-to-School night at my school, with the emphasis on night. Literally I am holding my eyes open with a toothpick.

But onward and upward we go in our quest to protect the varieties of religious experience from those who would restrict our diets to one food item ... of their choosing!

Speaking of diets, especially those rich in spiritual properties, I have a very, very interesting companion here today. Did you know that some anthropologists believe that the consumption of hallucinogenic mushrooms may have been the foundation of the earliest forays into religious belief? Word, dudes. That stuff will make you at one with the Universe. Or so I'm told. We at "The Gods Are Bored" are not keen on ingesting fungi or controlled substances. Against the law and all that. *Occupy the DEA* 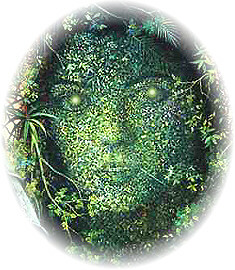 My "Gods Are Bored" guest today is not a mushroom, however. It's a leafy green New World plant, used for at least 3,000 years in sacred ceremonies throughout the tropical Americas. Ladies and gentlemen, please give a warm, wonderful "Gods Are Bored" welcome to Banisteriopsis caapi, better known as the hallucinogenic tea Ayahuasca!

Anne: Welcome, Ayahuasca! I'd offer you a cup of tea ... but that's what you are.

Ayahuasca: I'm not your cup of tea, though. You haven't been initiated into the Mysteries.

Anne: So true. About the most adventurous I get is a vodka gimlet. But this isn't about my religious experiences, it's about America's religious experiences. And You, o Sacred Ayahuasca, have been foully and cruelly treated! Everyone has heard the tale of the DEA agents bursting in on a ceremony of the Unaio do Vegetal praise and worship team in New Mexico. The agents pulled You right out of the priest's kitchen and carted You off to the slammer. (Or in this case, the refrigerator.)

Ayahuasca: We took them to court. To the Supreme Court. And we won.

Anne: Damn right, you won! It's called the First Amendment, and there's a long and well-documented use of Ayahuasca tea in numerous religious paths originating in the Western Hemisphere. I was rooting for Unaio do Vegetal every step of the way.

Ayahuasca: Thank you. Here is how I look at it. You never see DEA agents bursting into a First Communion, confiscating the wine, and arresting the priests for serving alcoholic beverages to minors.

Anne: Absolutely correct! But ... emmm ... playing the devil's advocate here, I'd have to say that You are far more potent than watered-down communion wine.

Ayahuasca: I am an all-powerful source of the wisdom of the universe. My followers know this and use Me with care.

Anne: As they have every right to do, under the second clause of the first sentence of the First Amendment. I've read some accounts of Your use. And of course, Timothy Leary, Terrence McKenna, and Erowid. It does sound to me like, if one used You responsibly, one could communicate with any bored god on the radar.

Ayahuasca: And many who aren't.

Anne: I understand that only the men in Your praise and worship team get to use You.

Ayahuasca: Don't pass judgment. It's My praise and worship team, and that's how we roll. Specially-trained males only.

Anne: Hey. Whatever moves the spirits of Unaio do Vegetal is a-okay with me. Ayahuasca, I hope Your legal troubles are over. How would Your praise and worship team feel if the U.S. government not only outlawed Your use, but outlawed the religion that it springs from?

Ayahuasca: We would fix that. A few infiltrators to the Albuquerque public water works, and soon everyone would be keen to join Unaio do Vegetal!

Anne: Well, that's a little extreme, even for me. Why don't You just settle for spiking the punch at the next Rick Perry prayer breakfast?

Anne: Thank you for dropping by, Ayahuasca. If I ever decide to go tripping on tryptamines, I'll give you a holler. Don't hold your breath, though. If I made it through the 1970s without dropping acid even once, I'm not likely to start at my age.

Ayahuasca: I am part of a significant and highly ritualized praise and worship. I'm not for sipping after a long day's work. Just keep that in mind.

Anne: Oh, I do! I do! See? I'm about to sip a glass of pinot grigio. The gift from Bacchus, who doesn't give a fig how it's used and abused.


To me, what is most beautiful about America is the fact that small sects like Unaio do Vegetal, who are able to tie themselves to established patterns of worship, have the absolute right to use hallucinogens in their rituals. This small New Mexico praise and worship team is hardly unique in its use (not abuse) of mind-altering substances. Long may they hold their sacred plant to their souls and soar with It to their Gods!


Congress shall make no law respecting an establishment of religion, or prohibiting the free exercise thereof. First Amendment to the Constitution of the United States of America. So might it be.

I am loving this series!

I haven't commented for a while because the word scrabble verification wouldn't come up.

But I have been following you.

Keep giving us those delightful bored Gods and Goddesses.