Well, I think I'm a day behind the bell-ringing black magicians who want to void our Constitution and declare American dependence upon Jesus Christ. But that's okay! Consider me the cute little janitor who mops up after Mr. Peabody's and Sherman's big parade!

Whoa, sports fans. That sure dates me, doesn't it?

West Virginia is the state that needs cleansing today. To this I am firmly dedicated. You see, my conversion to Paganism became official in West Virginia. And when I need to meditate with the Salmon of Wisdom, it is to West Virginia that I return.

Little U.S. history here: When the Civil War began, Virginia seceded from the Union. But fully half the state consisted of rugged mountaineers who farmed difficult terrain for a subsistence living, using only themselves and their children as the workers. These people did not support slavery. So they didn't want to secede. Magnanimous President Lincoln declared them a state all unto themselves. And if ever a division of territory was meet and just, this was the occasion.

As for my conversion to Paganism, it was a slow process, beginning with connection to the Divine Feminine through the Blessed Mother of God. Which of course has no place in Methodism, except for the teenager who gets to dress up like Mary for the Xmas pageant.

My dad broke his hip. He was in end stages of Parkinson's Disease. When I went to see him in the nursing home, he told me he saw Peter Pan in the doorway of his room, "just standing there, with his hands on his hips." 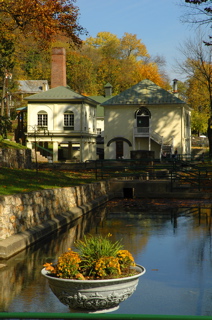 Shaken by the sight of my dad in his last days, I got in his car and drove to Berkeley Springs, WV. For years I had been dreaming of a sacred spring that would heal my sorrows. Literally, readers. Years. In my dreams I was always looking for it. Little did I know that it was Berkeley Springs, a town near where I grew up, but just far enough away that I only went there at night, for away football games.

By day I discovered that Berkeley Springs is a warm springs (charming place), and for twenty bucks you can bathe in a huge tub of heated springwater.

It's like that tub of Berkeley Springs water just washed away the Fertile Crescent god entirely. What was already eroding just plain exploded. I went into that bath house one person, and came out an entirely different person.

And when I emerged into the air, the whole universe had expanded before me. I felt Divine from a hundred thousand sources. Not just one pantheon, not just one vulture in the sky. Everywhere.

I felt Faerie too. Major Faerie. And yes, I could see Them at that moment. Some were in the spillway, some were playing with the children, and Some were across the street in the window of a store. (Jules Enchanting Gifts, see Sidebar.)

Three months later, this blog was born. It is dedicated to any and every deity that can or could be called "Pagan." I once told Isaac Bonewits that I'm not a polytheist, I'm an omnitheist. Show me your deity, and I will praise Him/Her/It.

I follow the Druid path, somewhat. I say somewhat because I even believe in the Fomorians and Fir Bolgs and all the deities displaced by the Celtic pantheon. None of this matters, though. Divine is everywhere. It cannot be quantified, reified, or understood with our limited brain function.

Thank you, thank you, West Virginia. State of my heart. Love of my life. Forget the "almost." The place is Heaven. Ask any bored deitiy. Ask me.

Congress shall make no law respecting an establishment of religion, or prohibiting the free exercise thereof.

--Bill of Rights, U.S. Constitution
"When I die, won't you bury me in the mountains? Far away in my Blue Ridge Mountain home."
Posted by Anne Johnson at 7:30 AM

In a very old issue of the ADF newsletter I remember a fascinating article by a member (who is now a priest of the Order, I believe) recounting his experience of formally undoing his Christian baptism, in a waterfall... it sounded like a similarly powerful experience.

Beautiful story, Anne - thanks for sharing it with us. Thanks also for the reminder that you don't have to travel to a stone circle in Europe to find a magical place.

Berkeley Springs is such a magickal place. I go there in my dreams a lot. It's like a haven.

How wonderful to read the story of your enlightenment! And (being Canadian) I never knew the difference between Virginia and West Virginia before, so thanks for the history lesson.