Welcome to "The Gods Are Bored!" It's the holy month of Samhain. No better time than that to send laughter and love to every state in America! Today we're fishing with the Devil. Not really, of course. We have no commerce with the Devil. Nor do the good sports men and women (and kids, the photos are awesome) who enjoy the beautiful environs of Devils Lake, North Dakota.

EXHIBIT A: THE LAKE BEARING THE NAME OF DEVIL INTO AMERICA 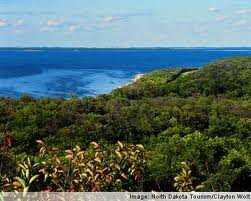 I have always wondered why there are so many great and small geographical anomalies named after the Devil.

We all know which Devil I'm referring to. He has lots of names. My favorite is "Mr. Applegate." But call him what you will, the Devil is:

He makes you buy dresses, abuse substances, murder kittens, whatever. And if you worship him, what the hell are you doing here at "The Gods Are Bored?" Go get yourself some ugly skull tattoo, head down into your mother's basement, and listen to Ozzy records to your heart's content. Just don't darken this blog. The Devil is evil. We hate evil in all its forms. It sucks, and that's that. Go away, Devil worshiper!

But back to the topic. Devils Lake derives its name from a mistranslation of a Sioux term. The Sioux (cleaned out and sent packing) called it "Bad Spirit Water." Only the Sioux have no Devil in their pantheon. The "bad spirit" was the lake's salinity, which varies depending upon rainfall. 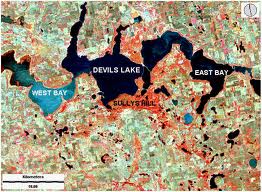 Here's the satellite photo. This puppy is a big lake. And very popular with sports enthusiasts, especially those who fish.

In "One Nation under God and Only God," what would this lake be called? Would the fish in it be considered evil? Would it be re-named Turtledove Lake, or Gabriel Lake, or something causing a financial turmoil as businesses, mapmakers, hotels, and restaurants -- and a whole friggin town changes signs?

You see how silly things could become in a One God world?

Where I grew up, there were many geographical features named after the Devil. Most of them reflected the Devil's personality: jumbles of rocks at the bottom of mountains (Devil's Racecourse, Devil's Den), odd bends in the Antietam Creek (Devil's Backbone). And that's just in one little section of Appalachia. Imagine having to re-name everything that has "Devil" in the title. Crikey, even a sports team!

The moral of this little sermon is this: Any theocracy must bend over backwards to eliminate the perceived evil in its midst. This would have to include an Orwellian eradication of stuff named after the Devil ... no matter whether its a mistranslation from Sioux (cleaned out and sent packing) or not.

Congress shall make no law respecting an establishment of relgion, or prohibiting the free exercise thereof. --Bill of Rights, U.S. Constitution.

The devil's in the details.
Posted by Anne Johnson at 4:16 PM

"The Sioux (cleaned out and sent packing)..."

When I lived in Manitoba, people used to drive down to party at Devil's Lake all the time. I'm not quite sure what the attraction was. Perhaps just the name. Anyway, speaking of Manitoba, there's a small desert near Carberry that contains the "Devil's Punchbowl" -- a stagnant little pool of undrinkable water, polluted by Gawd Knows What.