Gods on the Reservation

Welcome to "The Gods Are Bored!" Do you ever wonder what America was like in 1491? There's a very interesting book about it. It's called 1491: New Revelations of the Americas before Columbus, by Charles C. Mann.

Mann covers the archeology being done on Original Western Hemisphere cultures. Conclusion? In 1100, there were cities in the New World bigger than Rome, London, or Paris -- with better roads and cleanliness. Mann puts the population of the Western Hemisphere in the millions, rather like the other side of the world.

So, how could a few European explorers conquer such large cities?

Forget all you've read about Native Americans thinking the "palefaces" were gods. Crock of crap.

What the European explorers had was smallpox. To which the inhabitants of the Western Hemisphere had no immunity. Mann hypothesizes that as much as 90 percent of the Native American population was wiped out. By the time the Pilgrims arrived, this Native die-off was a hundred years gone, mostly. And the New World was a huge forest, occupied by a few "noble savages."

These "noble savages" still didn't much care for people coming in and occupying their homelands. So there was some fighting, more treaty-making (broken by the government repeatedly), and eventually a virtual roundup of Indians, who were dumped, tribe by tribe, in Oklahoma. 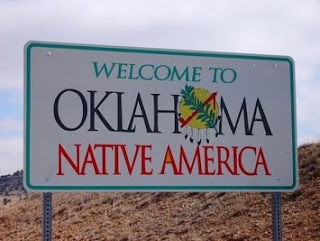 If you look at a list of Native American tribes living in Oklahoma today, it's almost a "Who's Who" of Indian history. Comanches. Delawares. Cherokees (notorious, that round-up), Shawnee, Pawnee, Cheyenne, Seminole. These groups did not come to occupy Oklahoma because they liked the scenery and the fertile soil. The state was basically a concentration camp full of helpful missionaries and schools that taught English and table manners.

Which explains why a state that is rick smack-dab in the middle of the country was one of the last to be granted statehood. Until the 20th century, it was Indian Territory. Where people like the Outlaw Josey Wales hung out.

Many Native American deities had to give way under the onslaught of the followers of the busy god. You would think that this meant an end to all the praise and worship teams of those old deities. Thank goodness traditions die hard! Native Americans are reclaiming their Gods and Goddesses, all the while getting revenge on us with their casinos.

There are so many Native American deities in Oklahoma that I couldn't possibly interview Them all. Instead we should pray for all these deities, and all the Native Americans in Oklahoma, that they keep the faith of their forefathers and the wisdom of their grandmothers. They are nations.

Maybe that's why it took so long for Oklahoma to get its star on Old Glory. It's pretty hard to pledge the flag as "one nation under god," when in fact there were -- and are -- hundreds of nations under the banner... and hundreds of gods.

OK, Oklahoma. Rock on with your Ancient Ones! Congress shall pass no law regarding the establishment of religion, or prohibiting the free exercise thereof.
Posted by Anne Johnson at 5:37 PM

Go, Anne! Thank you for this series of posts!

I think it would be ironic justice if a new plague broke out that Native Americans were totally immune to.....

Very nice post. I was born and spent a lot of my childhood in Oklahoma, and the culture there is very unique. Most people do not realize how richly populated the coasts of the Americas were before colonization.

However, for Mann to say that much of the NA population was already wiped out by the time the settlers got there is at odds with a textbook I'm working through for a history class. Michael Leroy Oberg asserts in Native America: A History that virgin soil epidemics did not preempt the coastal settlers entirely, and there is documentation about epidemics sweeping through Native American communities into the late 1700s. Granted, of course, much of the Plains Indians populations were already compromised greatly, such as the Lakota/Dakota/Sioux, Caddos, Apache, etc., so that is accurate.