The Bored Gods Go to School 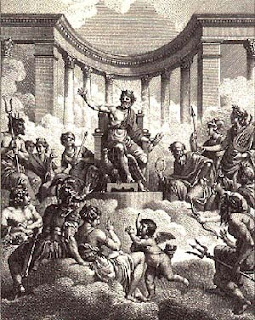 Welcome to "The Gods Are Bored" on a picture-perfect autumn afternoon! What a tonic for a day spent indoors at a teacher in-service meeting!

I always have to laugh when I trudge into my night school classes for "alternate route" teachers. Those classes are taught by a schmoozer who threw his students into lockers and spent most of his career with highly-motivated AP history kids. Here's a question for you: Did this "instructor" keep up with the current trends in education for at-risk students?

Anybody? You, in the back row! Does my night school teacher know butkus about modern educational models? Wow! You're absolutely right! He knows NOTHING, ZERO, ZIPPO! The last time this guy had a clue was 1986. And it wasn't much of a clue at that.

However, my school district is wallowing in No Child Left Behind money for state-of-the-art specialists who come in personally and teach all the teachers how to teach. These are the helpers that the smart money rides on. For one thing, my school administrators monitor the sessions and then expect us teachers to do what the specialists say. Which is easy enough. All you have to do is listen to the specialist and have high hopes.

These modern specialists don't recommend shoving bad kids into lockers and locking the door and telling them they won't get out until they promise to behave. Apparently that teaching model has been retired. Someone should tell the night school dude. Won't be me. I wouldn't want to interrupt his navel-centered soliloquies.

Finally I'm getting around to today's sermon! Sorry for the long-winded intro. I guess I am picking up some tips from night school.

In the nice, new, modern teaching book handed out today were some little factoids teachers use to spark student interest. One of them was:

*Earth is the only planet not named after pagan gods.

Now, I guess I knew that in the back of my mind. It's nice to see it in print, though.

Talk about tough! Those bored deities of the Greco-Roman pantheon have rocked on -- literally -- in the face of intense pressure! We have no Planet Gabriel! Tra la la!

I guess I shouldn't gloat, but as a proud defender of the bored gods, I can't help but be pleased that even the most Bible-bound, homeschooled, literalist, sectarian, I-Must-Not-Touch-Myself Christian kid simply cannot get a legally-sanctioned school diploma without learning the names of the planets in our solar system. And that means memorizing and chanting a fine list of names of deities that would otherwise have been put way out of orbit a long time ago.

It gets even better. Teachers aren't supposed to talk about God in the public school classroom. But by Jove, they talk about Jupiter! And even Jupiter's Moons are named after deities!

All hail the magnificent sky.

Speaking of magnificent sky, this morning just before dawn I got up to see the Orionids. It was clear, and about as dark as it gets in New Jersey, from the vantage point of my back yard. Alas, no meteors. But after about five minutes of staring, it occurred to me to wake up The Spare. (She had asked me to anyway.) Even though there were no meteors, it was possible to identify Orion and Sirius. Taurus was lost in the white light.

After having the cheek to re-name Orion with a nice feminine name ("Pavlova," long-forgotten blog post), I decided on the spot to revert to calling the constellation Orion, so The Spare would learn her constellations. This was even before being reminded that so many celestial bodies, and meteor showers for that matter, are named after the popular polytheistic dynasty of old.

All hail the magnificent sky, filled with monuments to deities that hear their names from every child's lips! Mercury, Venus, Mars, Jupiter .... ah, Neptune! They all shine on.
Posted by Anne Johnson at 4:23 PM

It's true that Earth is not named for a Greek deity, but Earth is nevertheless named for a pagan deity, I believe -- Erda (Eartha), the Norse goddess who is the equivalent of the Greek goddess Gaia. So the nice, new, modern teaching book is wrong, it seems.

oh but wait... in some places, they are allowed to talk about God (in the context of creationism) in the science classroom! not just in Kansas folks... right up the road (from you anyway) in Massachusetts. Proposed legislation here: http://www.capecodonline.com/apps/pbcs.dll/article?AID=/20091007/NEWS/910070320/-1/NEWSMAP

who is the one that thought up the name earth anyhow?...who was the first person that called it earth..and what was it called before then..? can I come and smack your teacher?

I remember the renaming of Orion post which is either a sign of how truly pathetic I am or just how great you are as a writer. I'm going with the latter. I suppose it's some indication that my memory is improving. I find that Mini Me is spending far less time searching the freezer for my lost items (putting things in the freezer is a sign of Alzheimer's it seems - not that I've done it yet, but she has little faith in me or my memory and so she checks the freezer)! Take that, Mini Me!

And this morning I realized that, of course, the other planets are not named for Greek deities, but for Roman deities -- d'oh! Hoisted on my own petard!

Hail to the magnificent sky indeed! (And if you ever get tired of "Orion" again, you could always use his Egyptian name, Sah. :)

I always thought Sibzianna had a nice ring to it. Rodger Cunningham