Who Does He Hear Singing Now? 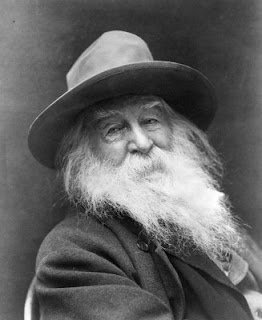 Welcome to "The Gods Are Bored!" Today we add a new hero to our Pantheon of Special Mortals. He is Walt Whitman.
I think Walt Whitman must have been very brave to pen the poetry he did in an era so dedicated to rhyme and meter. His courage certainly bore fruit. Who among us does not love the guy?
If you're not singing the body electric, you're missing out. The bored gods will say you squandered your mortality, and they'll send you back for another try.
Two nights ago, my daughter The Spare sat down at the computer and labored mightily over a poem that she was writing. I won't bore you with the details, but the big picture in her poem was how nourishing she finds it to go to the mountains.
Her poem was created as an assignment from her English teacher, who plans to send the best class poems to a poetry contest open to high school students in Camden and Gloucester Counties, NJ, and Philadelphia City.
The contest honors Walt Whitman, who is buried up the street from me in Camden City.
This morning, on my way out to the Vo-Tech, I stopped in my home office to freshen Decibel the Parrot's water bowl. When I looked at my desk, the faeries shoved into sight the information on the poetry contest. The Spare had left the flier on my desk. (Along with an empty Sprite bottle and some Cheez-It crumbs.)
I looked down at the flier, and the faeries looked up at me, and it occurred to me to take the flier to the Vo-Tech and encourage the students there to enter the contest.
After all, who does Walt Whitman hear singing these days? His spirit may still be in Camden City ... among my students.
I'm not a regular classroom teacher. I'm a special needs tutor. But this is actually better, because I can cruise through the school like the Pied Piper, handing out the flier and offering to expedite the mailing of the poems the Vo-Tech kids write.
Just today I got my first two poems from students. The students wrote the poems out by hand, and I typed them up. If enough students contribute, I may have sufficient material for a little chapbook by the end of the year, whether they win the contest or not.
Odds are they won't win. Gosh, two heavily-populated suburban counties and the City of Philadelphia ... and all four grades of high school? Walt Whitman himself probably couldn't win the doggone thing. But I'm not going to tell my students that. Nothing ventured, nothing gained.
And when what you gain is a poem you've written, that's enough in itself.
Mr. Whitman, meet your new neighbors.
Posted by Anne Johnson at 4:03 PM

yay for fairies and poking thier noses in. I hope they helped clean up the cheez-its.

Poetry/art/beauty are those things so often found in the last place expected.

Yes, even if none of them win, they'll still have a their poems. That itself is WONDERFUL. I'm speaking as a (newly) published poet. There's everything to gain and nothing to lose in submitting poetry! :D

i was never into poetry much, but i always liked ole walt...for someone who doesn't like poetry i have tons of books of poetry...
you know?...my little brain is working.I have books on every subject known to man kind and a few unknown..some great books...some that might be good gifts for 'special students.'...let me know what your teaching and i'll see what i have..kay?
email me.

Anne, you're a blessing! Your students are lucky to have you.

(Actually, we all are lucky to have you.)

I thought poetry was boring and hard to understand at that age. But I loved music, esp. pop music with lyrics you can sing. (And isn't it interesting that the songs we most attach to are often the ones we listed to as teenagers?) Sometimes teens relate to "Poetry" better when they think of it as songs.

I have been surfing online more than three hours as of late,
but I never found any attention-grabbing article
like yours. It's pretty worth sufficient for me. In my view, if all web owners and bloggers made good
content as you did, the internet can be a lot more helpful than ever before.