Welcome to "The Gods Are Bored!" How do you stand on the matter of waterfalls? As for me, I could qualify for Waterfalls Anonymous, if such a group existed. I just slobber over waterfalls. Best thing about that is, no one notices a little bit of Anne drool dripping into a cascade of clear, mountain water.

A few years ago, the combination of some weight loss and increased aerobic activity led me to attempt some daring and dangerous waterfall hikes that I might have sensibly avoided before. One of these was Glen Onoko Falls Trail near Jim Thorpe, PA.

The Glen Onoko Falls Trail is steep, slippery, rocky and perilous. But it's not like there's no warning. 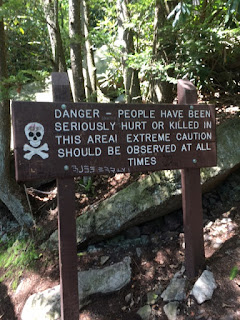 And the sign doesn't lie. There have been about a dozen deaths along this trail (one of them a 3-year-old) over the years. The reason is that many people are totally lacking in sense. Maybe the sign should read 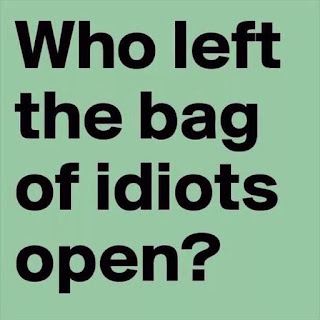 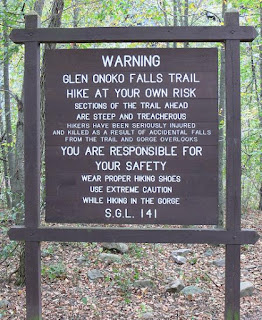 About ten minutes into our hike up the trail, my daughter The Heir and I met up with a family all clad in flip flops. There were parents and children. The hike had already begun to look challenging, and here these kids were in fucking flip flops.

Needless to say, Heir and I -- both clad in our sensible hiking shoes with good tread -- left the (presumably) illiterate family behind as we began to ascend toward the falls.

Glen Onoko Trail has three beautiful waterfalls. It's astonishingly gorgeous. But it is also steep, slippery, and perilous. As I was climbing (can't call it hiking when you have to use your hands too), I made a mental note that maybe I ought not try this ever again. It saddened me to think so, because... 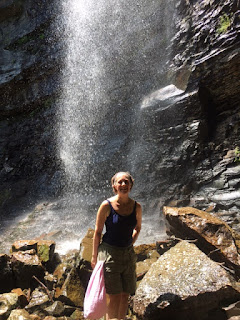 This waterfall is so tall we couldn't get both me and the top of it in the picture. Nor can you see my sturdy hiking boots.

I've been on some rough trails in my time. The Appalachian Trail will always test you, and I've been tested. But I must say that inch for inch, Glen Onoko Falls Trail was the toughest hike I've ever taken over such a short distance. Oh, boy was it worth it, though!

This trail is the only place I ever saw a dog unwilling to follow its masters, as they tried to coax it onto rocks that should hold neither dog nor human. 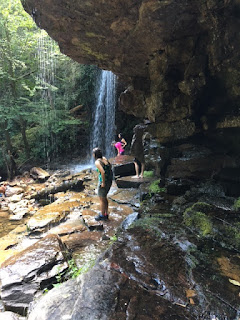 The water table was low when Heir and I went, but at all times hikers could walk behind this cascade. It being August when we went, Heir was glad for the shower. I stayed behind, judging the rocks too slippery for a woman of a certain age. 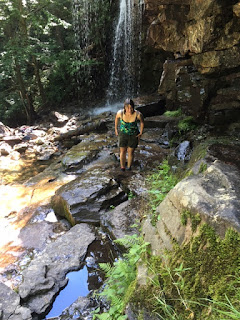 I wish I had a better shot of Heir's grin as she came back from being behind the waterfall!

Long story short, the Pennsylvania Fish and Wildlife Commission, owners of this area, have declared that, effective May 1, the Glen Onoko Falls Trail will be closed.

Yes, closed. As in, not even people with sturdy hiking shoes will be allowed.

The rationale for this is the loss of life (all of it people who climbed to the top of the falls and then just had to go to the edge and look over), as well as the inevitable broken bones and sprains that can occur on such a challenging trail. You see, it takes a whole boatload of first responders to evacuate someone from Glen Onoko because the terrain doesn't accommodate stretchers, let alone vehicles. And people do get injured up in there. Apparently quite often.

So goodbye, Glen Onoko Trail! Nevermore will you end the existence of a drunken frat boy as he declares, "Hey guys! Watch this!" Nevermore will you host six-year-olds in flip flops or bridal parties in gowns and heels, looking for photo ops. 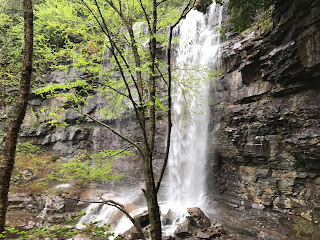 Nevermore will you host women of a certain age who, having ascended the challenging trail, feel a lingering sense of accomplishment ... heightened by the fact that everyone else at the top is a generation younger.

Nevermore will you host people who exercise monumental hubris, figuring the signs are for all the other people but not them. Oh, wait. Those morons will still rush in where angels fear to tread.

pity the idiot deplorables had to ruin it for the rest of the intelligent world.

We took a class on waterfalls of Maine. The field trips were great, but there was a woman in her late eighties that kept going as close to the precipices as possible. Even stepping out on slippery rocks. We were so concerned for her that it took a lot of fun out of the trips.
the Ol'Buzzard

I'm glad you were able to experience it before it closed. It looks gorgeous! If you are ever out this way (Oregon) be sure to bring your sturdy hiking boots with good tread. We have waterfalls galore!

so beautiful..people are stupid..
I remember in Hawaii there was an upside down waterfalls..there was such a strong upwind that it would push the water back up..was so cool..