"Science Is the Poetry of Reality"

It's a very odd feeling when you participate in a March for Science, out of concern for the anti-science sentiments in government, and you find yourself marching in the footsteps of Benjamin Franklin and Thomas Jefferson. This was the principal thing on my mind as I took to Market Street, with Spare and her friends, for the Earth Day Science March. 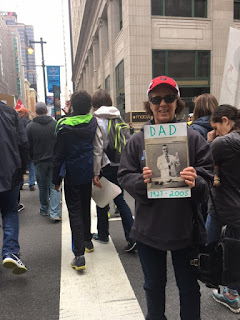 My simple sign was a photo of my dad, in his lab coat, with a beaker and an equation on the chalk board behind him. I also included his birth and death dates. In this way I felt that he was marching with me.

Spare, of course, is more flamBEEant. 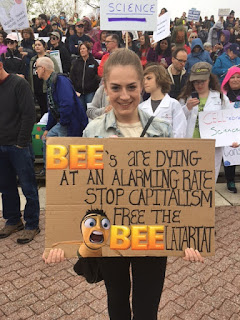 This was the strangest crowd of marchers I've ever been in. I guess you could just say that these were all smart people. Call them geeks or nerds if you will, but you could almost feel the intelligence beaming off of everyone. Honestly, the signs weren't as creative as at the Women's March (Spare being the exception), but they were sincere. No one is taking this lightly, is I guess what I'm saying. 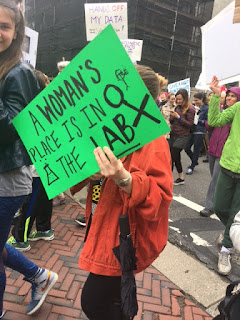 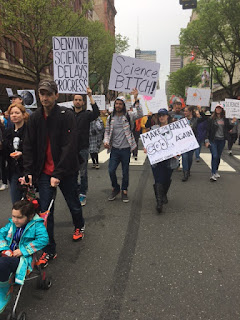 We barely got to Penn's Landing before it began to rain. It rained in earnest. Spare and her friends floated off, but I had a rain slicker, so I puffed out my chest and stayed for the speakers. I stayed and stayed. You remember how boring those chemistry lectures were in college? Well, those were the people who were speaking. It doesn't matter, though, because all the sentiments were the same. Science made this country great. Science has unending potential to benefit humankind. Science brings progress. Inventors should be respected. Energy should be renewable. We can all be scientists, even in small ways like monitoring our local creek. We should run for office, call our government officials, keep the pressure on. Vaccinations are a good thing, de-funding the EPA and Planned Parenthood isn't. Not all scientists are atheists. Geology is a helpful predictor of history. And I forget the rest, there were lots and lots of speakers. 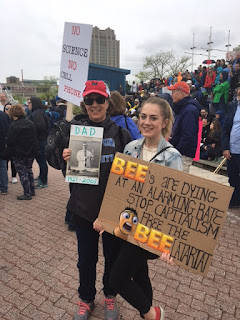 Spare is in a dark place just now, so it was good to see her engaged in this worthy pursuit.

Benjamin Franklin was very much on my mind as I marched. Funny thing, as I was walking back up Market Street after the event was over, I passed a historic landmark that I'd never noticed before -- what's left of his house. So I walked back there to what might have been his front door. I thought about knocking, but I couldn't bring myself to do it. How could I look a Founding Father in the eye and say that the same great nation that put a man on the Moon is now dumping data and denying climate change? I let him rest.

The title of this sermon comes from a sign I saw but couldn't get a good picture of. It said "Science is the Poetry of Reality." Okay, well, poetry is the poetry of reality too, but I thought it was a good slogan anyway.

And of course we chanted as we marched:

What do we want?
SCIENCE!
When do we want it?
AFTER EVIDENCE-BASED PEER REVIEW

As I said, it was a rather strange march.

thank you for marching, anne and spare!

since I cannot march, I spent earth day at home gathering unwanted documents and non-working electrical appliances for a shredding/recycling event at my township building next saturday. my office has some electrical appliances for recycling too; I will ask my co-workers to load them in my trunk this week. I also installed some twisty bulbs into dead incandescent light sockets.

SCIENCE BITCH says it all!

That's a great photo of you, Spare and your signs. And love that chant, lol!

proud of you and the spare

Keep it up'
the Ol'Buzzard

With SOoo much STUPID in the White House, soaking in intelligence would be blissful! I get all giddy when hear anything that tugs at my limited brain cells! Never thought that would happen hahahahaha! You both did your ancestors PROUD! xoxoDebi
Spare is a lovely miss, dispute is NOT her colour! xo