Hello there! You may have Googled Malcolm Kenyatta's name and come to my page as a newcomer. If so, welcome aboard! I am a resident of New Jersey, progressive as get-out, and I believe in a future that is epitomized by Malcolm Kenyatta.

Now, my three regulars. I know you have never heard of him, so I'll give you some back story on Malcolm Kenyatta.

My daughter The Fair lives in Center City, Philadelphia. When the pandemic began and her hours were cut, she couldn't get unemployment because there was an unresolved issue with a social security number that she had gotten wrong once, on a long ago job. Fair was so upset, crying, certain she would never get things straightened out, and I told her to call her State Representative. I even looked up his name in the Pennsylvania legislature. His name: Malcolm Kenyatta.

Finally I persuaded Fair to call Malcolm Kenyatta's office, and his staff quickly fixed her issues with Pennsylvania and got her that unemployment pay.

It's kind of sad that no one knows their State Representatives can do such things. People are way too used to the idea that the government doesn't care about them at all, except at election time. But long story short, Representative Kenyatta has an efficient staff, and they are quite helpful.

Then one day I was driving to work, and the local news station played a clip about a State Representative who was giving Republicans some kinda sass in a committee meeting. The clip they played was hysterical. Bunch of old white men telling Malcolm he was out of order, and Malcolm not having it. I thought, "That's the guy who helped Fair! I think I have a new hero!"

It was about this time that MSNBC discovered Malcolm Kenyatta, and he started appearing on the various evening shows. That's where I was able to put a face to the name. The odd thing is that now, I can't even remember the issue that got him on national t.v. There are so many that could qualify.

If you want to see him standing up for voting rights, here he is.

Earlier this year, Malcolm Kenyatta announced that he is seeking the position of Senator in the state of Pennsylvania. It didn't take me two seconds to sign up to support his campaign, even though I'm across the river. I'm doing it for my daughters.

Malcolm Kenyatta is young, gay, progressive, and passionate. He reflects the America I would like to see, where people of all races and persuasions have a seat at the table where big decisions are made. I like the way this young man doesn't suffer fools. I flat-out love his platform.

So imagine my surprise and delight, when I went to this year's Philadelphia Labor Day Parade, that I turned around and nearly smacked into Malcolm Kenyatta! I did a little squeee, of course, and before I could say ICANTWAITUNTILYOUARESENATOR, we were hugging for a photograph. 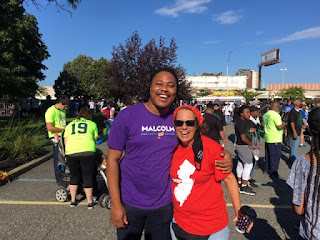 Readers, I do truly want to see this fine man advance in the halls of government. If you live in Pennsylvania, vote for him. If you don't, invoke the help of your deities on his behalf. He is the America we need to see.

He sounds like a super guy! I hope he wins the Senate seat!

I watched the video. Thank you for calling our attention to this guy. I like him. And I did not know that the office of a representative would deal with that sort of problem.

I first heard his name when he was elected to office, becoming the only Black and LGBTQ person elected to the state legislature.
He seems like a smart level-headed human and we need more of that in politics. I hope he goes far.

Young, progressive, Black and gay? I will definitely ask the blessings of my Goddesses for his elevation to Senate! The demise of the old white men's club can't come soon enough.

That's a highly political last name your friend has. Strong associations in East Africa with anti-colonialism...and some less good stuff.