Work and Play with My Union

I feel like I'm being let in on the final act of a play. At the tender age of 58 (almost 9) I have become active in my local bargaining unit.

Due to the resignation of one of my school's teachers mid-year, I agreed to be a member of my unit's Rep Council. (I'm already on the negotiating committee.) You know what I didn't know? Being a rep means you're warmly welcomed at state- or region-wide leadership conferences.

On Friday I went to my first-ever winter leadership conference. It was good ol' unionism at its finest.

The conference was held in Atlantic City, at a casino. We had a one-hour workshop Friday from 6 to 7 p.m., then a sumptuous banquet from 7-9. Then our unit's regional director cordially offered to drown us in alcohol at the hotel bar. Then the other members of my unit who were there decided to play beer pong in the large, loud pub on the casino's ground floor.

Saturday morning we had a gourmet breakfast, followed by four hours of workshops in which it seemed that everyone (myself excluded) was nursing a morning head. Let me tell you, readers. I've struggled through many a 5-hour teaching workshop, but this union one was riveting. The hours flew by. I'm not even being glib.

We had a mid-morning break during which we were showered with fresh fruit, hot beverages, and pastries. There were stacks of salt water taffy sitting everywhere.

After the final two-hour work session, we had a lavish luncheon buffet that featured five different desserts.

I had a private room in the casino. I've lived in New Jersey since 1987 and never stayed in a casino before.

I watched the sun rise out of the Atlantic.

EXHIBIT A: AS ABOVE 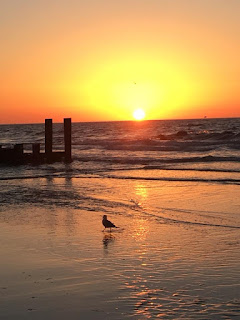 The union paid for my room, for all of the food, for parking, and (through a member) booze. I'll be reimbursed for the mileage to and from the conference.

I write this because in a few weeks the U.S. Supreme Court will render a decision that will make union dues 100 percent optional. This is a goal long sought by corporations and the one percent, who correctly perceive that collective bargaining benefits workers in terms of wages, health care, and working conditions.

Would you cough up $50 out of each of your monthly paychecks for union membership if you didn't have to? Especially if you were told that you would benefit equally with every member who does pay their dues?

So as I donned my union identifier badge and shouldered my swag bag, I had a sense of twilight, or autumn, in the whole organized labor adventure. It's a given that a conservative court will take a tire iron to unionizing's knees. Public sector unions will find themselves begging members to pay dues, and employers will be sure to hire candidates who won't want to join the union.

Until all of this crashes down, my fellow union reps and I will gather in Atlantic City to hold an idea dear -- that workers are stronger when they are bound by formal ties.

Dire times for the union movement for sure.

mommy, why do the GOPricks hate unions so much?

fecking republicans..
and a good time was had by all

The Supremes will be putting all the collective bargaining chips into the employers wallets. Before too long we'll be back to 60+ hour weeks and no days off. Ever.

Getting close to time to leave this turning-into-a-shithole country. Or take it back.

Australia is a 'niceish' place to migrate .. o, do not come in a leaky boat ... but Aeroplanes are good .. wry heh.
(even valid Visa 'over-stayers' can hide ... Um, a Science Degree is a good start .. especially if you have at least a reasonable command of the language "English" ... though might take a while to comprehend Aussie Jargon ... meh).