Put It to the Test

Good morning from "The Gods Are Bored!" I just read the most depressing article about county fairs in the New York Times. The drought in the heartland has wreaked havoc on prize-winning zucchinis and 200+ pound pumpkins.

For those of us who grew up eagerly anticipating the county fair, this is a sad story that illustrates the scary commencement of a new Dust Bowl in our primary food-producing regions.

But, hey! Let's all be distracted by silly stuff!

Just in on Yahoo News:

Johan Huibers, a Dutch contractor and millionaire has reproduced a copy of Noah's Ark, built the proportions laid out in The Bible. 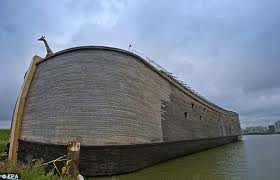 Now, recall that we here at "The Gods Are Bored" believe in "production for use." This is why we abhor firearms and even those bottle rockets that take off peoples' fingers on the Fourth of July.

In this case, though, I think "production for use" applies.

Considering that the world could be headed into a new era of catastrophic flooding, I think we should pack up that ark with two of every living creature on the Earth. Of course we need also to leave room for the dinosaurs. We can calculate that space by using the existing dinosaur fossil skeletons for measurement purposes.

Rounding up insects will be difficult and, at times, perilous. However, it is not fair to exclude them, since they are the largest family of creatures on the planet. I volunteer a stink bug, gender unknown, and a pair of silverfish I found mating in one of Mr. J's boxes of newspaper clippings. Mosquitoes can fly, and there are too many in my yard to catch, so I'm going to leave that chore for someone else.

We also need to make comfortable space for eight people. And a storehouse for food supplies, 40 days' worth, including all the vast variety of foodstuffs animals nosh on. I have a shrubbery that could keep a pair of leaf miners going for 40 days. They can have it if they dig it up and take it away.

There you have it. Production for use. Load up that ark, set it adrift in the Sargasso Sea, and look for the snow-white dove bearing an olive branch. A sodden olive branch bearing no fruit, because it was submerged and drowned.

Hmmm. Problem there. All the plants drowned! How are we going to feed the leaf miners until new shrubbery can be nursed to maturity?
Posted by Anne Johnson at 1:27 PM

sigh*..what a waste of time building that ark...

Apparently, there's a movie coming out soon about Noah starring Russell Crowe, of all people. Your post is timelier than you know!