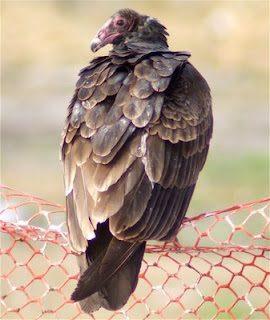 Welcome to "The Gods Are Bored," voted best buzzard blog of this or any other era!

Okay, I made that up. But who could beat me for best buzzard blog?

Thanks to a helpful commenter, I discovered that September 5, 2009 was International Vulture Awareness Day. This must be a new event. How else would I not know about it?

You would think that nothing would be sturdier than a vulture. For eons this has been true. Then, of course, along come humans, the best destroyers since that comet blasted the heck out of Mexico to end the Cretaceous Era.

In the past twenty years we've seen a vulture die-off of massive proportions. Before scientists pinpointed the reason, millions of vultures were killed in India, Africa and Asia. Some spectacular buzzards have been driven to the brink of extinction.

How did this sacrilege happen?

Farmers began giving their cows non-steroidal anti-inflammatory medications. And these medications cause vultures to melt from the inside out.

(Oh goodness, if I ponder this I want to weep!)

Fortunately, we now know the cause of the carnage. What remains to be done is to re-vitalize and restore the vulture populations. And why would we do this? Well, in India the role of scavenger has been taken over by dogs. So, what's more dangerous, a pack of wild dogs or a wake of vultures? (That's the group name for buzzards. Appropriate.)

We at "The Gods Are Bored" revere the Sacred Peace Eagle/Thunderbird and hope that this year, and every year, our world sets aside a Vulture Awareness Day. Long may they glide!

Our operators are standing by to take your call.

Photo by Birdchick.
Posted by Anne Johnson at 11:56 AM

In the news awhile back, a pack of dogs attacked and KILLED an elderly couple. Never ever did I hear of a pack of vultures ganging up on anybody........

Get you California vulture fix here.

There is an international day to bring awareness about me!!!!

People killing vultures, do not please me.

It's not a fair fight at all between humans and vultures. We kill to eat; they eat what's already dead. Did I ever link you to a thing we saw on TV about a Tibetan (I believe) practice of feeding their dead to the vultures. Magnificent birds they have in that area!