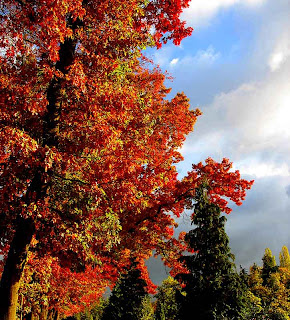 Welcome to "The Gods Are Bored," comfortably numb since 1981! Let's face it. If you're old enough to remember Nixon, nothing surprises you now.
In my teens I was a big fan of Henry David Thoreau. The title above, "Simplify, Simplify," is from Walden, his masterpiece of nature-based navel-gazing.
This is not a treatise on Thoreau. I'm still thinking about that History Channel show, Hillbilly: The Real Story.
(Yes, this blog is bipolar. Bored gods one day, Appalachians the next. We try to be inclusive. Big, broad, flexible outlook and all that.)
In a two-hour documentary, it's easy to make Appalachia look pretty homogenous, the domain of Scots who were first relocated to Ireland and who then took ship to America, where they were shuttled off to Appalachia to kill Native Americans.
See the above autumnal tree? That's a metaphor for Appalachia. No two leaves exactly alike, don'tcha know.
Happens that both of my parents hailed from Appalachia. Mom was born and raised in a valley between the Blue Ridge and the Alleghenies. Her ancestors lived in the Blue Ridge. Dad was born and raised in the Alleghenies. Where he lived they called it "Allegany."
I am the first of nine generations to live outside Appalachia. So, all ye filmmakers, hearken to my family tree:
Scots-Irish, yes indeed:
Hanna
Lashley
McDill
MacElfish
Morrison (maybe Scots)
But, soft! Also from the same mountains, find:
Middlekauff
Brinham
Kennard
Tewell
Blue
Mountain
Iames
Bennett
Don't Kennard and Mountain sound suspiciously French to you? That show, Hillbilly: The Real Story conveniently forgot that the Scots-Irish were not the first white people to visit the mountains. The French got there first. They traded with the Indians. There was a war, and those French and Indians had to come from somewhere.
A guy named Blue, like a dog named Blue, can be from anywhere.
Bennett. Oh my golly, gee whiz. Could there be some English DNA in Appalachia? Bennett, as featured in Pride and Prejudice, is probably a good ol' Norman Invader name. As in benet, "blessed."
I never met a Scot named Middlekauff. Did you? In fact, I know my Middlekauff ancestor sailed to America from the Palatine, an old name for a part of Germany. He was one of the first of my ancestors to venture into Appalachia. There are so many Middlekauffs in Western Maryland that you can hardly throw a bratwurst without hitting one.
I'm still part owner of the family farm from which my great-great grandfather (nee Elbin) marched to the Civil War. It was once 150 acres and got split between my grandpa and his older brother. Farther along the mountain road that criss-crosses the farm there's a new family who moved in around 1982 and built a house about 500 yards from the plaque marking the Middle of Nowhere.
That family's surname? Kurkowski. They've already inter-married with the Mountains and the Kennards and the Perrins and the MacElfishes.
(Okay, I'm exaggerating about the intermarriage, but the Polish name is for real.)
How about black people who live in Appalachia? Are they African Americans, or Appalachian Americans? I submit that they are Appalachian. Heck, there have been black Appalachians since the day after Jamestown. And no matter how hard we've tried to push out all the Native Americans, there are still plenty of Indian hillbillies.
History Channel documentaries notwithstanding, Appalachia is a region with as much diversity as most of the rest of America. It's just those mountains that make a difference. They're pretty, and people like living there, through many generations.
Can I go home now?
Posted by Anne Johnson at 8:14 PM

I'm going to the mountains (you know where) this weekend w/ Son, DiL, and G/Son. All week I find myself thinking at odd moments, "Soon, soon." I need the mountains.

i have relatives from mississippi, south carolina, alabama, georgia,etc..i think we started out as vikings and we have been systematicly been thrown out of every country and state since the 1100's...Texas took us in..has regreted it ever since..but since we're not mexicans or yankees..they let us stay...

Others have commented on the exclusivity of the definition of Appalachian. Possibly most notable are the Affrilachians. The term was coined by Frank X. Walker, who once looked up Appalachian in the dictionary and found that the definition specifically excluded them. They are certainly worth a read.

grate post. bof lines of my fambly tree are appalachian, but they have names lack cameron, dagley, lyle, chester, kirk, duncan, eddlemon & boone (yes, that boone). purty mixed up bunch, witch thays a cherokee in thar that we dont have no surname fer.

point is, our appalachian forebares wuz frum all over.

I am such a hopeless mutt there is no tellin'. I like the way you mix up the gods and our fair part of the world.

I wonder if the scriptwriters were not a little under the influence of Grady McWhinney, author of Cracker Culture: Celtic Ways in the Old South (1988). Google him, and you will find yourself in some interesting places.