Interview with a Bored God: Tezcatlipoca

Hello out there in the Google-space, it's time for another installment of "The Gods Are Bored!" I'm just back from a little week-long visit to the Chesapeake Bay. It was hot. There were crabs.

So I got home last night, steaming and exhausted, and I turned on CNN in time to see this bearded Branson billionaire being interviewed about his trip into space. He was so damn effervescent about seeing the Earth from that height. Until the CNN interviewer asked him if the experience gave him an increased sense of what he might do to save said Earth. Then he hemmed and hawed, because, like, should he care?

Next up, Jeff Bezos. Going into space in his craft week after next.

Enough of this, already! Let's get a Bored God to put a stop to it. Please give a warm, wonderful, "Gods Are Bored" welcome to Tezcatlipoca, sacred Sky Deity to the Aztec people! 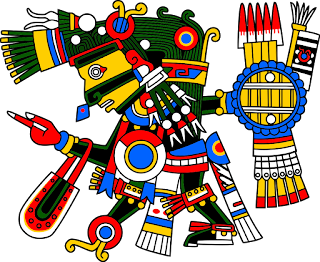 Anne: All glory, laud, and honor, great God! Must say, Your people had the right idea about how a deity should look.

Tezcatlipoca: You called, white woman. I answered. Get to the point.

Anne: Yes, Sir. Well, I just have a simple petition, and since You are a Sky God, I thought I might put it to you.

Tezcatlipoca: Don't tell Me what I am! I know what I am! What's your petition?

Anne: I was just wondering if You could kick these space travelers to the curb. I mean, they are getting right there in the sweet zone, basically Your living room. Can't You give them the boot with Your onyx foot?

Tezcatlipoca: You mean, like I should have done with those conquistadors?

Anne: Yes! You've got the gist!

Tezcatlipoca: And you think that would be the end of it. I mean, I could crush these assholes like bugs, but just turn over another rock, you're going to find more bugs.

Anne: One certainly understands Your cynicism. But with all due respect, the conquistadors never soiled your carpeting. These rich fucks building their own spaceships are leaving tracks of dirt everywhere they go. Now it's landing right on Your stoop. I don't know, that would bother me.

Tezcatlipoca: Are you talking about that "Aguirre the Wrath of God" wannabe that disturbed My nap the other day?

Anne: Yes! Exactly! Blonde guy, conquistador to the bone! He woke You up? Mmmm. I mean, I'm not You, but I wouldn't have that.

Tezcatlipoca: I just didn't see the point of flicking My wrist at that gnat.

Anne: Trouble is, there are more gnats on the way. They may start making a habit of it.

Tezcatlipoca: That won't do. I just re-did my stoop.

Anne: There's another one planning to invade Your space in just eight days. And let me just tell you, this man has no respect for stoops. He flings stuff at stoops millions and millions of times a day! Thinks like a conquistador in every respect.

Tezcatlipoca: He'd better not fling something at My stoop!

Anne: He will, great God, and it's likely to be something useless like a shoe horn or a pair of yoga pants.

Tezcatlipoca: How many days until this man dares to invade My home? It will be his last dare.

Anne: Eight. And if I might add, now You're showing the right spirit.

Tezcatlipoca: Thank you for the alert. I will unleash the Serpents and Jaguars. He'll rue the day he soiled anyone's stoop!

Anne: All glory, laud, and honor.

Well, as they say, it's not what you know, it's WHO you know! And you went right to the top!

Excellent interview with an excellent god. I wish branson and bezos would go to space and stay there.

I'm with Janie Junebug; Branson is a twazzock and an egotist supreme who is not happy unless his creepy face is all over the news. Perhaps Tezcatlipoca should wipe him out with a well-aimed lightning bolt. And Bezos is greed incarnate.

All Hail the Bored Gods! All Hail Tezcatlipoca!

Someone needs to rein in these obnoxious boys and it may very well take the power of the Sky God.