Welcome aboard, "Gods Are Bored" mateys! All hands on deck! It's another installment in this vast online diary of mine.

March 1, 2020 was on a Saturday. The sky was completely clear -- that color of blue that you get only in the fall and winter. Temperatures hovered in a comfortable 50s, as I recall. 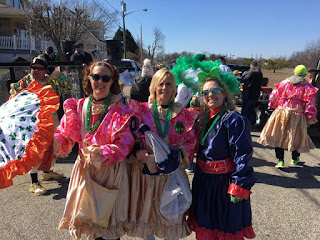 I remember this clearly for two reasons: One, because it's always memorable when I march with the Two Street Stompers, and two because it was the last social event I would attend in 2020. I just didn't know it at the time.

We were all joking that day about how early the Gloucester City St. Patrick's Day was. Sixteen days before the actual holiday? But we figured it was because they invite so many string bands to perform in that parade. The demand for string bands definitely grows the closer you get to any holiday.

Boy, did I have fun that day! The Gloucester City parade is a good one. The street is pretty narrow, and chock-a-block with revelers on either side. The dancing is universal. And the route is just the right length. Not too long, so we run out of gas, but not so short that we say, "Wait. What? It's over already?"

When we were done parading, there was a big party in a crowded pub, everyone quaffing the spirits, and a double dose of bagpiping in the parking lot. A great time was had by all.

I suppose COVID 19 was on the map by then, but I hadn't started to register much alarm. A week later, that had changed, and I was stacking my house to the plimsol line with every conceivable foodstuff, both perishable and nonperishable. Quarantine did not find me unprepared.

Since then I have been home. Home, home, home.

Here's an interesting fact about this pandemic, here at Johnson Penitentiary.

In an ordinary calendar year, I generally cook two turkeys. One at Thanksgiving, of course, and a frozen one in dead winter -- usually on a snow day.

A whole year has rolled along, and in that year I have cooked four turkeys. Yes, four. And those of you who do it know that's a task.

I cooked the first turkey in April of 2020, because when I took my bi-weekly trip to the grocery store there wasn't any other poultry product except frozen turkeys.

I cooked the second one on Thanksgiving. It was only me and Mr. J.

I cooked the third one for Christmas. It was only me and Mr. J. The turkey in question was one that Mr. J picked up at deep discount right after Thanksgiving.

I cooked the fourth one last week. It was a frozen one I got with a coupon prior to Thanksgiving.

That's four turkey dinners, 12 turkey casseroles, 8 large pots of soup, and a dozen sandwiches. All consumed by just me and Mr. J.

In an ordinary year I would have had four parades instead of four turkeys. I vote for a return to that.

Turkeys vs Parades. I'm sure you are tired of turkey by now! In an ordinary year I usually cook one turkey and this year I didn't cook any. I live alone and I just couldn't be bothered. I wouldn't be having my dad and brother over, nor would my daughter and son-in-law be visiting. On the flip side of that, however, is the fact that I have cooked more this year than any other in my life! Tired of it! I texted a friend last week and said, 'I just want to go out for a burger and tots!'

Also, I love your parade photos!

yes -- we are working on going through meat and other food in the freezers -- one in the kitchen fridge and one in the old fridge in the garage.

It will be interesting to see if folks still stock up as the year (and hopefully the vaccines) progress! Always keep up with the local sales!

Wow, that's a LOT of turkey leftovers! My Rare One usually makes 3 big delicious turkey dinners a year -- Easter, Thanksgiving (October in Canada) and Christmas. But that's dependent on having a whole bunch of friends come over to help eat it. So in 2020 -- not one single turkey dinner was made.

I don't eat turkey, so I'd vote for the parades.

I almost think one turkey is too much unless there is a crowd of eaters. Four? Wow, that's a lot of turkey. I second the vote - more parades, less turkey.

What planet were you living on a year ago?
March 1 2020 was a Sunday. It was February 29 that was the Saturday that year (leap year).

I feel your pain. Lucky it's just me and as much as I would have liked to fix one..I didn't..

Turkeys -vs- Parades, I'd opt for the Parades too... I'd opt for anything other than Pandemic Penitentiary Living. We're getting on each other's last nerve. In our household, mostly due to Pandemic, our Multi-Generational Household has expanded to add another Generation... three Generations under one roof due to Economic uncertainty, job losses, deadly Virus = Mental Health Challenges. Today I lost my shit at the Two Grown Men who were fighting over how to cook in a Cast Iron Frying Pan... I kid you not! I was ready to take a sledgehammer to said Pan and then throw it in the driveway and run it over with the Truck just to drive home how much I didn't Care about a damned Pan... and how much do Care about Tranquility, Harmony and Loving Kindness towards one another in my Home! *Winks* Instead, I jumped in the Truck in my Pajamas... and took off for a few Hours to calm down... watched some Migratory Geese at the Lake nearby and came back to Center. By the time I returned there was no more Trouble in Paradise since they knew they'd come quite close to sending me over the Pandemic Lockdown Edge.