You know how it is. You're sitting in the dining room with a cup of tea and the newspaper ...

Wait. This dates me.

You know how it is. You're sitting at the island with a solo cup and your phone, and you start feeling sorry for yourself. You start wondering why you don't have any friends.

Earlier this summer, I was wondering why I didn't have any friends. Of course, I had the answer. I'm not a bit sociable. When you spend your whole day entertaining teenagers, it's hard to find energy on the weekends to lift a teacup (or solo cup), let alone socialize like a normal person.

I was really and truly convinced that my years of having friends and being a friend had passed me by. From now on it would be family and cat. Crickets when the weather starts to cool.

And then came August, when I was told I could just forget ordering any books for my classroom.

The first hint that I'm not friendless came on this blog, when I issued my shameless plea for school supplies. Loose leaf paper started arriving at my door. Then books. Lots of books. Including books that are appropriate for sophomores!

All of this generosity served to remind me that I have good pals out there on the World Wide Web. Even if I haven't met them. What does that matter? They're friends.

Then something else happened. My daughter The Fair had a show that she wrote and directed make its debut in the Philadelphia Fringe Festival. The show (now over) had a run of four nights.

At first I wasn't even going to mention the show on my Facebook, but I broke down and posted something about the production, and if any of my friends wanted to see it, they should hit me up.

On Wednesday night, my friends Buzz and Patti McLaughlin joined the Johnson family for the debut. I met Buzz and Patti at the Two Street Stompers Mummers club. So I've only known them about six years -- but it seems like they're family. Like I found myself with a brother and sister-in-law that I never knew I had, but suddenly they just appeared.

EXHIBIT A: BUZZ (LEFT), NOT DRESSED FOR THE SHOW 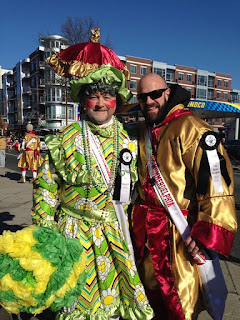 On Friday night, my friend Diane Rugala went with me to the show. We worked together at the Vo-Tech for about four years until she retired last year. We were thick while working, finding that our political views go together like a hand and glove. It was a pleasure to take the El train with her, and she really enjoyed the show.

EXHIBIT B: DIANE AND ANNE ON ANOTHER OCCASION 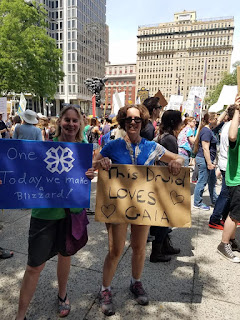 On Saturday, for the matinee, my good, long-time Mountain Tribe faerie friend Pam drove all the way from Maryland, and then had to take the El train to the theater all by herself -- having not set foot in Philadelphia since a heavily-supervised 8th grade field trip -- to come to the show. 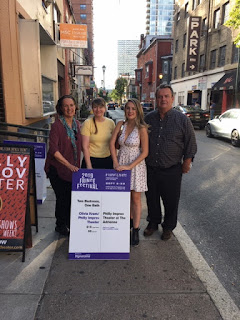 The bored gods have taken time out of their busy schedules to remind me that I do indeed have friends, and they're straight-up swell friends at that. The Fair's play was not free admission. It was a regular Fringe offering, with tickets. These friends of mine traveled to Philly, bought tickets, and saw the play.

If you combine that with the largesse for my school that has floated to my door, you will agree I need not be crying in my tea, or my solo cup, over the newspaper or the IPhone, because I don't have friends.

If you contributed to my classroom library (or paper), and you didn't get a thank-you note, drop me an email at
annejohnson17211@gmail.com

because I don't want to miss any friends!
Posted by Anne Johnson at 7:22 PM

OF COURSE you have friends! you are a lucky woman indeed!

I'm late to the party. What do you still need for your classroom?

you have lots of friends..and I'm at the top of the list.