Bonding with the Philly Tarot Deck

Welcome to "The Gods Are Bored!" We're from Philly, fuckin' Philly. No one likes us, we don't care. Go Birds! Wanna cheesesteak?

If anyone had told my little self in 1969 that I would live my life out 6 miles from Philadelphia (thereby investing all my heart and soul in that hapless hamlet), I would have either cried or jumped off a cliff, depending if there was a cliff available at the moment. I didn't have any interest in Philly, any connections to Philly, or even a smidgen of desire to set foot in it.

Hold that thought in your mind through the back story.

Like almost every modern Pagan, I have dabbled in the Tarot deck from time to time. But never with any enthusiasm. As with religion in general, Tarot is so doggone earnest. All drama, no humor. I could never wrap my mind around the standard deck. Then I got a Knights Templar deck, and that one was worse. But I do believe there's some wisdom to be had from Tarot readings, so I never discounted them completely. Just wasn't my cup of tea.

For Xmas, my daughter The Fair asked for two prints from a "Philly Tarot" deck. I had never heard of it. I followed the link she sent me, and the two she particularly asked for were Xed out. I don't know if that was because they were sold out or not. I couldn't see them.

But a quick perusal of the Philly Tarot deck made me think, "Gee, Fair must want the whole deck, really, she's more besotted with Philly than I am!" So I ordered it.

She didn't want the deck. Only the prints.

I didn't cancel my order for the deck. Hey, I live in fuckin' Philly, I should promote the local businesses, right?

Then my daughter The Heir and I went to Phoenixville, PA for the annual Firebird Festival. This shindig is always a highlight of the year. I like to get to Phoenixville early, in order to find a parking spot and do some shopping. Phoenixville never disappoints when it comes to Xmas shopping.

Nor did it disappoint this year. The local book store had the Philly Tarot prints, signed by the artist. And Oh. My. Gods.

EXHIBIT A: THE DEVIL 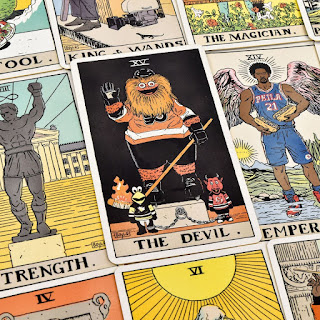 This was the print Fair wanted.

But as I leafed through the other prints I found this one:

EXHIBIT B:  THE KING OF SWORDS 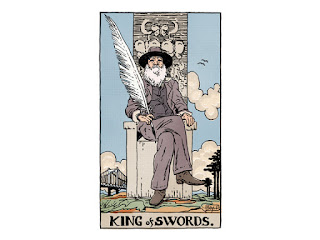 I think that's when I started to cry. Because I had ordered the deck without knowing that this was in there.

In due time the Philly Tarot deck arrived in the mail, right in the swirl of the holiday, so I put it aside to examine later. And it only got better, if that could be possible. 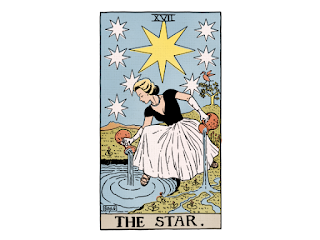 In addition to being beautifully created, these cards are a real love song to Philadelphia. Ben Franklin is the Emperor. Betsy Ross is the Empress. The Liberty Bell is the Hanged Man. And that ominous Tower, so foreboding that we have a whole era called Tower Time, is the detested Comcast Tower that everyone in the city hates with a passion.

I could go on and on.

You know how Tarot decks are. You have a major arcana and then the four suits, which are pretty much playing cards. Well, when I finally got to leafing through the suit cards, the Cups were on the bottom. In the Philly Tarot, Cups are cheesesteaks. And the figures on the Cups cards are Mummers.

I just want to throw these on the floor and roll around in them, I love them so much.

I don't think I will use the Philly Tarot strictly as card readers do. But I have my ways of using Tarot cards for myself and anyone who wants some advice. The important aspect of this deck, for me, is that this Tarot deck is chock-a-block with humor. Crikey! David Lynch, holding the iconic Clothespin statue, is the King of Wands! Throw that one in a reading and keep a straight face. I dare ya!

Long sermon short, I have fallen in love with my new Tarot deck, which combines all the standards of a regular deck with an abundant and loving tribute to the city I'm stranded in, probably until I croak.

If you want to see the whole thing, click here. I hope this artist is able to pay his rent on time just from sales of this card deck. That would make me happy.

This sounds like a fun deck! Mummers, Walt Whitman, all well and good, but Gritty as The Devil? Oh my!

Gritty as The Devil is hilarious! Is that Grace Kelly as The Star? Must be... Enjoy your new deck, however you use it. I can see why the Fair wanted the prints, they are fab.
Elizabeth

That is indeed Grace Kelly.