Beware the Pillar of the Community

I never liked Bill Cosby, even before women started bringing accusations against him. There was something unbearably proper about the man, probably at the very height of the years when he was ruining so many lives.

Those of you who don't live near Philadelphia might have been spared some of the worst of Bill Cosby, pillar of the community. As Temple University's most visible graduate, he often went there to speak. (In fact, that's how he finally got nabbed -- by a Temple employee.) Cosby would orate at length about his fellow African Americans' saggy pants and grammatical usage, taking them to task and exhorting them to be more white. At the time I remember thinking, "Who died and made you God?"

There's probably not one single African American male who heard those unseemly lectures who has behaved as badly as Bill Cosby. Alex, I'll take saggy pants for the win.

Pillars of the community -- especially if they're wealthy -- are never ever to be trusted. The more they set themselves up as superior individuals, the less you should believe it. I'm not cynical. I'm old. I've seen too many pillars (including members of my own family) who have had dark, hidden corners that didn't bear scrutiny. 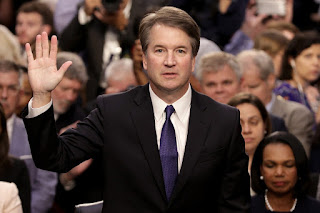 Now this guy, granted, he's no Bill Cosby. There aren't 60 women accusing him of drugging them and raping them in their helplessness. But make no mistake, this man is a pillar of the community. He is not to be trusted as far as you could throw a bull by the tail.

This man has a dark past that is almost lost to time. He was a rich, privileged prep school boy with a spotless record of sports and community service, good grades, and lawful behavior. He also drank like a fish. The evidence is all there. People might not have seen him attack women, but they sure saw him drunk.

I am entitled to my opinion, and it is this. If you see a rich, white prep school kid who seems perfect, trust me he is acting out by drinking to blindness and behaving like Mr. Hyde. He might (might) have qualms in the morning, if he even remembers ... but probably not.

When I heard that this guy coaches his little daughters' basketball team and has the signatures of scores of women who worked for him, a big red Bill Cosby flag went up in my mind. Beware the pillar of the community. The higher he flies, the more monstrous his behavior might be.

Bill Cosby got what was coming to him. (Actually I think his sentence is remarkably lenient.) Soon we will see if this other beast will get his as well. I say "beast" because we know so little about this man. The Republicans have hidden his record as a member of the Bush administration, thousands and thousands of documents. But even if we had them, who can support this pillar of the community? He doesn't even want his own daughters to be able to chart the courses of their bodies and their lives. How can we be sure of that? Our horrible president promised to seat Supreme Court justices who would overturn Roe v. Wade. And gosh, what else has the Orange Menace accomplished? He's gotta throw some scrum to his base.

If the evil Republican oligarch puppets do succeed in seating Kavanaugh on the Supreme Court, I hope it galvanizes women everywhere. Everywhere. We've had enough of these pillars and their perfection. They shouldn't fool anyone.
Posted by Anne Johnson at 7:23 PM

I was married to a pillar of the community. He has bipolar disorder and had a psychotic break. But when he was manic, he could convince people that the sky was green and the grass was blue. Cosby's holier than thou act never convinced me. The rumors had been around for years. I know people who still don't believe he's guilty and will probably never believe it.

While Cosby will (hopefully) die in prison I was also amazed at the leniency of the sentence. I heard he got a half cup of Jello for desert. Maybe Kavanaugh will get to be his cell mate.

My brother was sexually abused by a "pillar of our community." I have a visceral hate for the type.

I'm at the point now that it's hard to even like men.