Welcome to "The Gods Are Bored!" If you wonder what I'm eating here today, here's a hint: 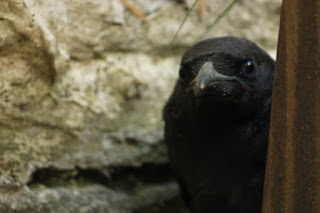 Yes indeed, a big ol' plate of crow for Annie the Pessimist!

I'm not literally eating crow. This is just the crow that The Morrigan sent to tell me off for being so snide to the Girl Scouts. If you didn't read my self-pitying diatribe (below), don't bother. It's not a good demonstration of the big, broad, flexible outlook.

My faith in the power of womanhood is restored, or at least greatly improved!

We Americans just witnessed the most despicable and sniveling performance by half of our nation's senators, and we were saved from the worst by two women. 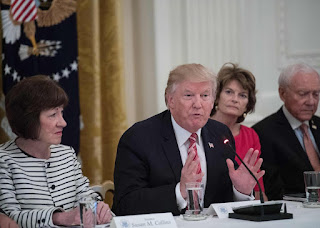 The "repeal and replace Obamacare" bill was so bad that the only people made happy by it were ultra-wealthy donors to the Republican party and media outlets run by the same. By all accounts it would have raised premiums and tossed folks off the rolls. It also would have ditched the supremely sensible mandate that everyone, no matter how healthy, have health insurance.

Never mind how ridiculous this legislation was. The old, ugly beast in the photo wanted it done, and so did the many Republicans who have loudly promised to repeal and replace for years while it was super safe for them to do so. Now, with their feet to the fire, they needed to make good on their spurious promises. They needed a WIN!

It's all well and good to give props to John McCain, who is actually dying, to come in and vote his conscience at the last minute, basically side-stepping that pressure. The ladies, Senators Murkowski and Collins, withstood the pressure. Thereby giving our nation's Girl Scouts a little whiff of what a powerful, brave, and principled woman can do. 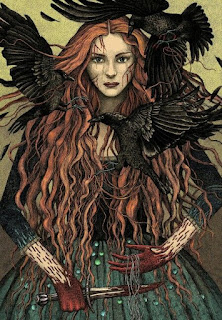 The Morrigan approves of these women. No more nonsense, America! We need strong women in positions of power! And, ironically, we are at a place in history where two Republican women stood up for what was right. The Morrigan likes women who don't cave under pressure. She doesn't care what color they wear, or whether they have pins shaped like donkeys or elephants.

This week is Lughnasadh. On Sunday I travel to the Sacred Grove to celebrate first harvest. I will petition the bored gods to reward and lift up two Republican senators who showed that they cared about their people. Our tribe is not a complete mess. Hope still resides in the compassionate heart.
Posted by Anne Johnson at 4:59 PM

I need to write to Susan Collins and thank her. She'll like getting a nice letter from me. I wish more republicans were like her. Maybe they could all actually do something constructive.

more shit would get done around here if women lead the way!

now if they would just quit the republican party.

The republicans resist women , they FEAR them! Besides, republican & a women, that is quite a conflict in my mind
These two stude strong, stude alone. Make know mistake, McCain has just started with the 3D chess game he is playing!
xoDebi

May the Goddesses shine on these Women of Honor!

And, in the meantime, I'm going to write and thank them. I'm sure they are getting plenty of hate mail, I will tip the balance the other way.

If we can get more women in the government things will get better. They couldn't possibly do worse than the dickheads that have been running the show. It is difficult watching the country get flushed down the toilet, but what else can you do with a shitstorm?